From record profits to Covid-19 devastation, de Juniac saw it all as IATA chief

While it is not unusual to experience highs and lows in one’s job, it would be difficult to trump the story Alexandre de Juniac can tell about his time as director general of airline industry association IATA.

When he took up the role in 2016, it was a boom time for the sector. In stark contrast, as he hands over the reins to former IAG chief Willie Walsh at the end of March 2021, the industry is grappling with existential challenges during its greatest-ever crisis.

That shift in fortunes fundamentally changed the skillset demanded of the IATA chief.

In 2016, de Juniac brought experience from time working in the French government and at the helm of Air France-KLM to a role that required diplomacy and a steady hand on the tiller. From 2020 onwards, unprecedented crisis-management skills were the order of the day.

Indeed, when de Juniac took over from former Cathay Pacific chief Tony Tyler in 2016, things had rarely been so good for the industry, with profits set to hit record levels the following year. 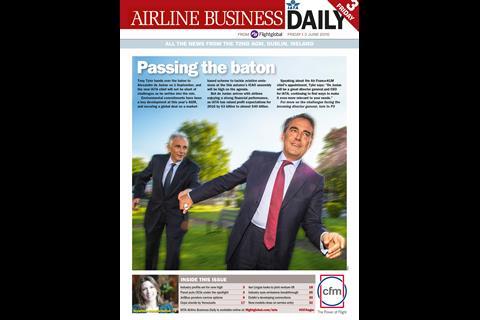 De Juniac was confirmed as IATA's new director general at the association's 2016 AGM in Dublin, taking the baton from Tony Tyler 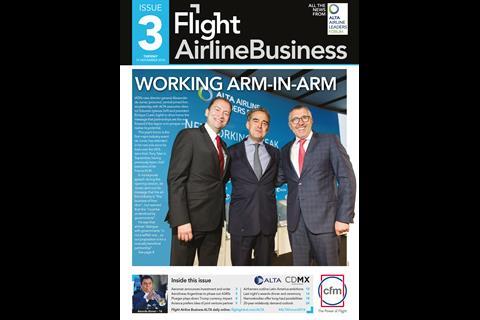 One of De Juniac's first major industry speeches was to the ALTA Airline Leaders Forum in Cancun in November 2016. It featured an early reference to his 'business of freedom' catchphrase 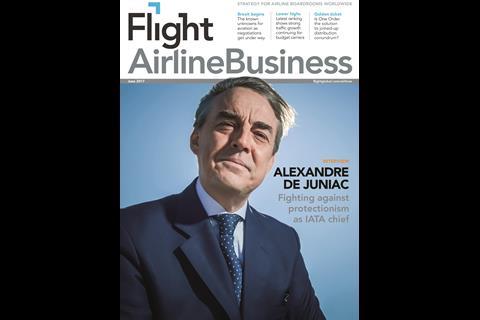 In the run-up to his first AGM as IATA director general, de Juniac was interviewed in Geneva for the June 2017 issue of Airline Business 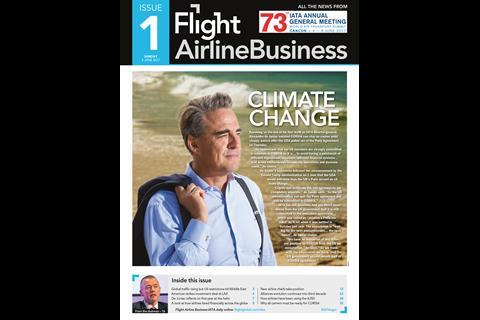 Taking place in Cancun, De Juniac's first AGM as IATA director general happened just after the Trump administration had pulled the USA out of the Paris climate agreement, prompting concerns over the country's commitment to aviation's CORSIA carbon offsetting scheme 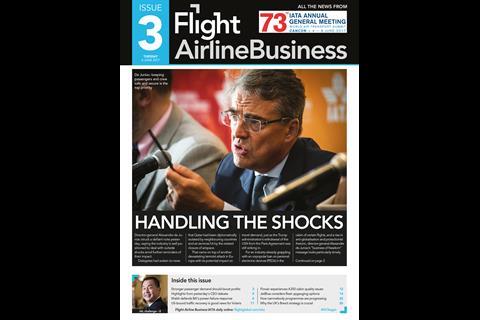 De Juniac talked up the airline industry's resillience in Cancun, as the AGM served as reminder of the sector's vulnerablity to outside shocks, as the Qatar blockade began during the event, just after another devastating terrorist attack in Europe. 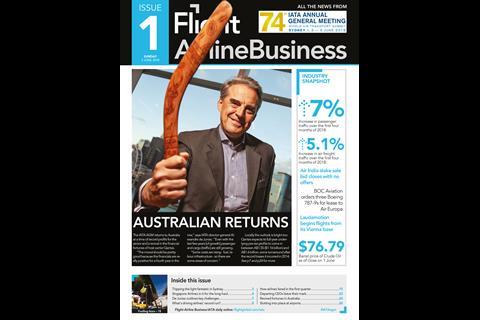 There was a buoyant mood at the Sydney AGM in 2018, amid expectations of another strong year financially for the industry, even with hints of approaching cost headwinds 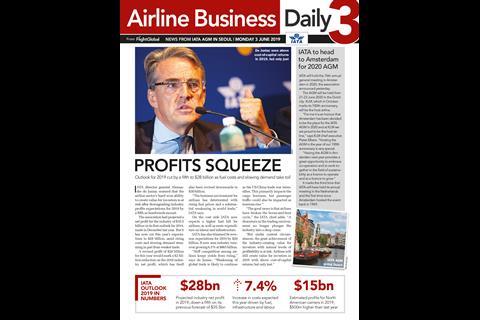 In what turned out to be de Juniac's last in-person AGM as IATA director general, the Seoul event saw concerns focused on falling profits, which threatened the industry's hard-won reputation in some quarters as a reliable investment target 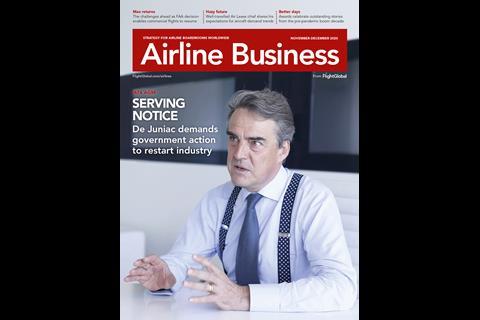 The November-December 2020 issue of Airline Business featured de Juniac on the cover, as he used his last AGM as director general to call for urgent action to save the industry, having announced his departure as the event began

De Juniac’s focus in those early years was on pushing back against the darkening of the political discourse in some quarters.

“We are very deeply concerned with the current political rhetoric, which points to a future of restricted borders and protectionism,” he said in early 2017, describing airlines as “freedom fighters”.

Travel bans – including those introduced by then-US president Donald Trump – tighter borders and restricted trade “deny the benefits of globalisation, [which is] a product of our industry”, he said.

By the time of his last in-person IATA AGM as director general in Seoul in June 2019, de Juniac was further warning on the threat to industry profits posed by a “deteriorating” business environment.

But even though airline profits had been tracking downwards since 2017 as economic fundamentals wobbled, it was not long before IATA was predicting a positive rebound in financial performance going into 2020. The bottom of the cycle might have been reached.

Everyone knows what happened next.

PANDEMIC TEARS UP THE RULE BOOK

At face value, travel restrictions and troublesome business environments are front and centre of the issues faced by the coronavirus-ravaged industry today. Very few people would argue, however, that the airline sector’s challenges during de Juniac’s first years in the role had any teaching value for what followed.

Where once the talk was of industry profits shifting up and down by a few billion dollars each year, since early 2020 the focus has been on stemming cash burn and simply ensuring enough airlines will see the next summer season.

It is difficult not to see cruel irony in the fact that the man who chose “the business of freedom” as his catchphrase is leaving one of the airline industry’s most high-profile positions with the world awash with swingeing travel restrictions, as it grapples with a challenge previously unimaginable in scale.

“When the house is on fire, you don’t pontificate about its future architecture, you throw water,” de Juniac memorably said – without a hint of hyperbole – in November last year, while demanding further government support for airlines and the introduction of systematic Covid-19 testing.

That fire is still burning as he hands over the baton, but de Juniac can at least cite a year of relentless campaigning and lobbying to save the industry.

Over the past 12 months, he became the face of desperate calls for government aid to rescue airlines with bailouts. And when he wasn’t asking for state intervention, de Juniac was arguing against travel restrictions and lobbying for systemic testing and other initiatives to allow for international travel to resume.

Suddenly, the calm, diplomatic Frenchman was throwing around words such as “catastrophic” and “apocalyptic” to describe the industry’s plight.

“My darkest hours were when I realised at the end of February [2020] and the beginning of March that it would be… a world crisis,” he recalls when asked about the high and low points of his time with IATA during his last press briefing in mid-March.

“The order of magnitude of this crisis would probably be something that is unknown [and] we had to completely shift… to a crisis mode… a crisis that would be a terrible one.

“The world that we knew disappeared… very quickly.”

But the crisis also brought about one of his two “proudest” moments while working for what he describes as “a role model for any industry association”, as he helped to lead the fightback against pandemic-induced devastation.

“The way we have convinced governments… that they need to intervene massively” during the early days of the Covid-19 crisis was one of the association’s most memorable achievements during his time in the role, de Juniac states.

Looking further back, he also highlights the adoption of ICAO’s global carbon offsetting scheme CORSIA in 2016 as a “proud” moment.

WHAT WILL WILLIE WALSH’S PRIORITIES BE?

Intriguingly, those two achievements are relevant to the biggest challenges ahead for his successor, de Juniac believes.

“As viewed from my position now, I think it’s to successfully and quickly restart this industry,” he states of what is likely to be Walsh’s top priority.

In the longer term, the challenge will be “to ensure that we maintain, develop and consolidate our commitments towards sustainability and the environment”, he says of an issue that shot up the airline agenda during the second half of his tenure.

And once Walsh is in place, surely a new IATA catchphrase will be needed?

Maybe not, says de Juniac, who notes that his next career move is “not totally defined yet”.

The social and economic costs of the global airline industry’s grounding demonstrates “perhaps better than I’ve ever thought, the fact that aviation and air transport is the business of freedom”, he states.