Hawaiian Airlines says it saw a marked increase in passengers from the US mainland, which helped stem the carrier’s losses for the first quarter of the year.

But despite the positive domestic news, the airline now needs inter-island and international traffic to come back just as strong in order to make a sustained recovery. 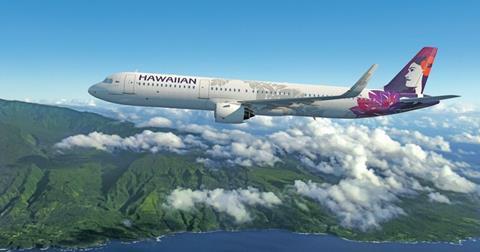 “We reached an important inflection point during the first quarter on our path to recovery with an encouraging rebound in demand, despite the challenges that the Covid-19 pandemic continues to impose on our business,” Ingram says. “Bookings in North America improved materially as we began to realize the pent up demand for leisure travel after a year of lockdown.”

“I am more optimistic each day about our progress as we rebuild our network and capitalize on the resilience of Hawaii as a post-pandemic vacation destination,” he adds

For the first quarter of 2021, the airline reported a loss of $60.7 million. That’s less than last year’s $144.4 million, when the coronavirus crisis was just in its early stages.

With Americans venturing out again after more than a year of staying close to home due to travel restrictions and fear of putting themselves at risk to catch the virus, the airline notched more than half of its first quarter revenue in March alone.

During the final month of the quarter, Hawaiian saw 110% of its 2019 booking levels, the airline’s senior vice-president of revenue management and network planning, Brent Overbeek, adds.

Ingram says that overall it feels like the airline is “out of the ditch and back on the highway”.

For the second quarter, Hawaiian says it expects to continue to rebuild its network as well as “significant sequential improvement in revenue compared to the first quarter, primarily driven by strength in North America”.

Notable among the bookings was the strong demand for premium seats, Overbeek says.

“Some folks have some money pent up from the quarantine and are clearly interested in a higher-end experience,” he adds.

But mainland travel is one thing, and international travel – integral to the airline’s bottom line - is something else entirely. Customers in the airline’s most important overseas markets, Japan and South Korea, are still holding back on planning holidays in the USA, given ongoing testing requirements in both jurisdictions, and other travel restrictions that make moving between the countries still somewhat complex.

“The timing of international [travel recovery] is a wild card,” Ingram says. “The optimism that it will come back strong is undeterred, but the timing is a little bit difficult for us to predict right now.” If the US is any indication, tourists from Asia will likely have the same kind of pent-up demand and disposable income to come to Hawaii at a later date, he adds.

In the first quarter, the airline operated just 12% of its 2019 international capacity, and that figure will be similar in the second quarter, Overbeek says. Once restrictions are completely lifted, the carrier anticipates international travel to ramp up quickly as well.

While travel between the islands of the archipelago, about 2,500 nm (4,500 km) southwest of the US West Coast, also improved during the three months which ended in March, it is lagging behind pre-coronavirus levels as the state maintains testing requirements and isolation restrictions that make inter-island travel difficult and complicated.

Ingram has repeatedly called on the state government to relax the rules, as more and more potential customers are vaccinated and the tourism business on the islands returns.