Hawaiian Airlines intends to restore much of its service to the Asia-Pacific region this year as countries around the Pacific Rim begin dismantling their coronavirus-driven mobility restrictions.

Speaking on the sidelines of the IATA World Air Transport Summit in Boston on 5 October, chief executive Peter Ingram expressed optimism the Honolulu-headquartered carrier will soon be able to again tap into its biggest non-US markets.

“I think we should see some greater ability for international travel from the Pacific region to Hawaii starting at the end of this year and accelerating through the first quarter and the first half of next year,” Ingram says. 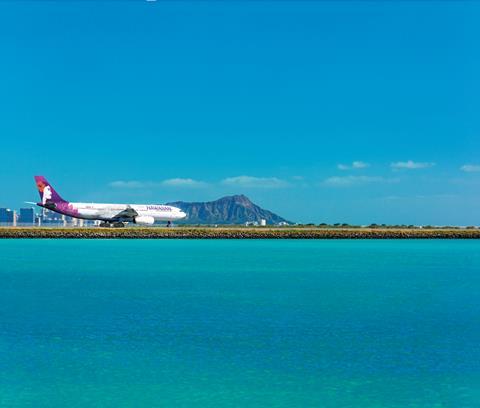 “It’s difficult to put a specific number on it right now, but what we’re preparing for is to restore our network throughout the Pacific,” he adds. Fleet preparation, staffing and training are in full swing so that Hawaiian will be “in the position to be ready for a strong recovery throughout the first half of 2022”.

Coronavirus protocols – including entry bans, quarantines and testing regimes – in the airline’s important international markets like Japan, South Korea, Australia and New Zealand are constantly evolving. But there now are more signs the countries will ease such requirements, allowing for more tourist activity, toward the end of 2021.

“As those restrictions come off, and the conditions are falling into place, with vaccination rates rising in all of those countries, we expect to see a strong recovery internationally,” he says.

Japan is Hawaii’s largest source of international tourists, with about 1.7 million visitors arriving in 2019 alone. That number plummeted in 2020.

“Pent up demand is real, but internationally we have not been able to realise that yet,” he says.

Ingram says that in July the airline flew 115% of its July 2019 schedule to the US mainland, with load factors in the high-80% to low-90% range – equal to the historical averages.

But like its US mainland airline peers, Hawaiian saw some softening of demand due to the risk of Covid-19’s Delta variant later in the third quarter.

“Starting at the tail end of July and into August, as cases rose, we did see our bookings begin to slow somewhat,” Ingram says. “That was exacerbated in the case of Hawaii by our governor making public comments about it not being the time for people to travel to Hawaii. And so that had an impact on demand.”

In August, the state’s governor David Ige said the health system on the archipelago in the middle of the Pacific Ocean was strained, and asked tourists to refrain from coming to the islands until after the virus surge waned.

That said, Hawaiian has experienced a successful September, Ingram adds. “We’re already seeing bookings stabilize and begin to recover and I think we’ll be able to make up some of that.”

The airline’s recovery will continue to be a roller coaster, with airlines needing to be agile to accommodate the fickle waves of the virus and its inevitable effects on travellers’ behaviour.

”There’s a lot of turbulence in the near term,” he says. “The opportunities continue to be very strong. We’ve seen that when people have the ability to travel, they really want to travel.”

“There’s no way to Zoom your Hawaii vacation,” Ingram adds.

Hawaiian has reactivated almost all its fleet, with 18 A321-200neos – the company’s workhorses for Hawaii-US mainland flights – at near-full utilisation. But Hawaiian’s 24 long-haul A330-200s, though also having returned to the active fleet, are “less intensely utilised until we get the international part of our network restored”, Ingram adds.