Underlining its challenges, the airline slid to a second quarter net loss of W31.4 billion ($26.8 million) for the quarter ended 30 June, blaming a “sudden changes” in the external environment and higher fuel costs.

Lee Seok Joo, the carrier’s chief executive and president since late 2017, recently sat down with FlightGlobal at the airline’s headquarters at Seoul’s Gimpo International airport. He notes that 2018 was a great year for the airline, featuring “explosive growth” and a full-year operating profit of W102 billion on the back of a 26% revenue jump.

Cirium fleets data shows that Jeju Air added eight 737-800s in 2018, with the fleet reaching 39 aircraft by the beginning of this year. By October it has added seven additional jets to bring its fleet to 46. The airline had also in November 2018 made a pivotal move for its fleet future, placing firm orders for 40 737 Max 8s with options for 10.

Then, from the second quarter of 2019, things changed. Supply started to outstrip demand, says Lee, and the average revenue per aircraft fell. Lee attributes this to the industry's cyclical nature, compounded by a diplomatic spat this year between Seoul and Tokyo that has its roots in Japanese rule of the Korean peninsula during the first half of the 20th century. 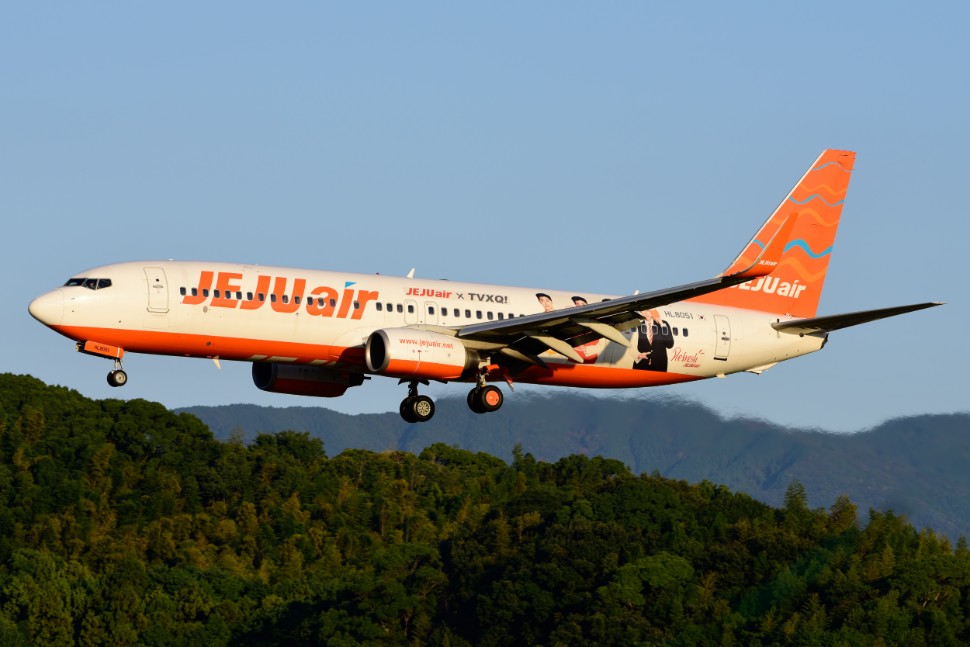 “In addition to the down cycle of the overall business, we encountered unpredictable diplomatic issues as well, so with those two factors combined...in terms of growth and profitability we are experiencing difficulties,” says Lee.

Another challenging market is China. Jeju Air used to have a thriving niche charter business flying Chinese group tours to visit South Korea. This collapsed in 2017 in the wake of a row between Beijing and Seoul over America’s deployment of the Theatre High Altitude Area Defence (THAAD) system on the Korean peninsula. Beijing ordered travel agencies to cease offering South Korean tours.

While Free Independent Travelers (FITs) still buy tickets to South Korea, Beijing has yet to lift the package tour ban.

As for other key international routes, the Vietnamese city of Da Nang remains a popular destination, but Lee says that this market is showing signs of maturity.

“Nowadays we see the growth is a little stagnant,” says Lee. “I think it's peaked, but I don't see a sign of decrease.”

The Korea-Japan spat, however, has seen Korean carriers cut capacity across the Sea of Japan, but add capacity to Da Nang routes. Cirium schedules data shows that October 2019 seat capacity between Japan and Korea will fall 26.5% on-year to 1.6 million. Jeju Air itself cut its capacity on Japan routes by 25%. Overall capacity on South Korea-Vietnam routes during the same period jumped 23.4% to 961,562.

Jeju Air will operate 310 services from South Korea to Da Nang this month, or 10 a day. “The competition in [the Da Nang] market is very fierce," says Lee.

On the domestic front, Jeju Air remains a key player on the Seoul-Jeju route, often touted as the world’s busiest. This crowded route is all but impossible for new low-cost carriers to enter, making it a bastion for Jeju Air. It has 15.8% of overall capacity on the route, or 122,000 one-way seats monthly.

Another, more adventurous, route was launched between Busan and Singapore this summer, featuring the airline’s “New Class” premium economy product, with four seats abreast. The route has proven popular both for Koreans and Singaporeans, and “New Class” has seen load factors of over 80%.

The Busan-Singapore route, however, highlights Jeju Air’s desire of operating narrowbodies to further flung locations. The 737 Max 8s will help expand the airline’s radius of possible destinations from five to seven hours.

The airline has not heard from Boeing about delivery schedules, but Lee is adamant that the aircraft be deemed safe before entering the fleet. “Without an assurance of safety, Jeju Air will not accept any Max aircraft. That is our policy in this company.”

The assurance Lee is looking for involves regulators re-certificating the aircraft. Following this, it will be key to get the buy-in from the airline’s crews, and also from passengers. “I will be very strict and rigorous on making a decision about this,” he says.

Still, the Max 8’s capabilities hold great promise for Jeju Air, and should one day be at the core of its business model, which places a profound emphasis on operating a single type of aircraft.

“The strategy of operating a single type is a source of operational excellence, a source of CASK reduction, and of cost competitiveness. Business cycles cannot be avoided. We have to find out the smartest way to achieve a competitive CASK position, and the single fleet is an important part.”

Meanwhile, the airline is focused on reducing costs, particularly with fuel, and also wants to be responsible about its carbon footprint. The airline’s flight operations and control centre are focused on reducing fuel consumption in the air and on the ground. Specific initiatives are being rolled out, including one to more accurately predict the fuel required for a sector.

The company also has a “Polar Bear” project aimed at reducing CO2 emissions. A poster in one of the airline’s conference room shows a polar bear in a pilot’s uniform, with the slogan “We Are Green Crew.” This voluntary programme has attracted the participation of 150 pilots. They undertake to perform fuel saving (and emissions reducing) efforts such as single-engine taxiing and intersection take offs, both of which reduce fuel used for taxiing.

Despite challenges on myriad fronts, Jeju Air is experiencing an easier time in one critical area: pilots. Previously, Korean pilots often headed to China for additional money, but this seems to have stopped, and Korean pilots are even returning home to South Korea.

“This year, many airlines in Korea moderated fleet size, so now pilot recruitment is not a big problem anymore,” says Lee. “It’s a big change.”

The availability of pilots, however, is also a symptom of a somewhat more uncertain outlook for the airline industry in North Asia. This is reflected in Lee’s views on growth.

“We are experiencing a downturn in the business cycle and unpredictable factors,” he says. “We cannot see when it will be resolved. It's time for us to moderate fleet size, and this year we will be very conservative in terms of fleet.”