JetBlue Airways and American Airlines have asked a judge to dismiss a lawsuit against the carriers’ so-called Northeast Alliance (NEA).

In a filing dated 22 November, the two airlines say that the suit, brought by the US Department of Justice (DOJ) in September, is “defective” because the “plaintiffs have not alleged that the NEA has actually harmed competition”.

“The NEA has been underway for nine months, yet plaintiffs do not allege that it has caused a single higher price, any reduction in quality or the slightest reduction in output,” the airlines write in the filing. 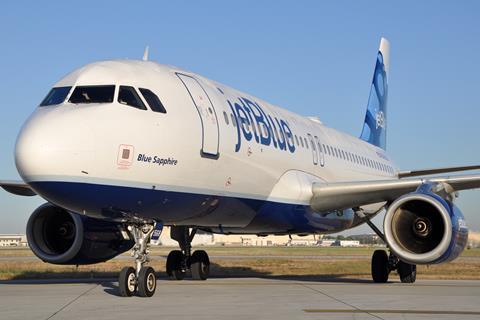 “Instead of alleging actual anticompetitive effects, the complaint attempts to predict adverse effects, repeatedly alleging that the alliance ‘likely will harm competition,’” the airlines say.

On 21 September the DOJ sued in US federal court to force American and JetBlue to stop their partnership, alleging the pact violates the Sherman Act, an anti-trust law.

The suit, filed in US District Court for the District of Massachusetts, claimed the carriers’ partnership would eliminate competition and harm consumers. DOJ also said the pact gives American too much sway over JetBlue, and threatens JetBlue’s ability to remain a successful low-fare counterweight in an industry that has significantly consolidated.

The suit seeks to “block an unprecedented series of agreements between American Airlines and JetBlue through which the two airlines will consolidate their operations in Boston and New York City,” the DOJ said at the time.

“In an industry where just four airlines control more than 80% of domestic air travel, American Airlines’ ‘alliance’ with JetBlue is, in fact, an unprecedented manoeuvre to further consolidate the industry,” US attorney general Merrick B Garland said in September.

DOJ says that the alliance represents a de-facto merger in the region, which JetBlue and American reject. Instead, they say, their deal evens the playing field in New York, helping them better counter United Airlines and Delta Air Lines, which have more New York flights.

Attorneys general in six states and the District of Columbia joined the DOJ as plaintiffs in the suit.

American and JetBlue revealed their partnership plan in July 2020. The US Department of Transportation (DOT) approved it in January, allowing the carriers establish a pact that includes code shares, coordinated flight schedules and aligned frequent-flier programmes.

The airlines say the collaboration has so far resulted in lower fares and better schedules to the benefit of consumers.

But the alliance was controversial from the start, with other passenger airlines, including low-cost carriers Spirit Airlines and Southwest Airlines, repeatedly opposing the collaboration.

Speaking at an airline forum on 17 November, JetBlue’s head of revenue and planning Scott Laurence said the airline’s partnership with American allows it to be “a better competitor in the northeast”, and that the company will “vigorously” defend the suit.

He added that the DOJ maintains its objections to the alliance, even though the product is getting better and fares are coming down. “That does not seem like an enlightened view.”

“We are going to win and we are confident about that,” he said.