The carrier is undertaking an “organisation-wide rightsizing exercise” across its operations as it looks to cut fixed costs, a move it says is essential to enable it to “scale up” when demand does recover. The plan is to be finalised by the end of September. 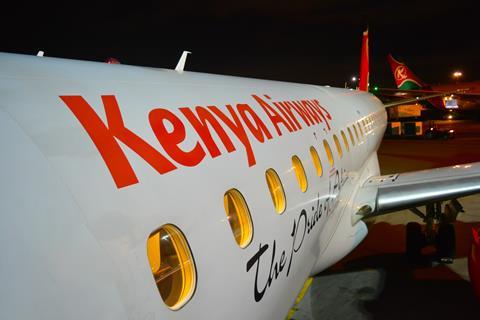 “The reality is that due to the Covid-19 pandemic, our operations have reduced significantly, and the business is unable to sustain the current workforce in the new circumstances,” says chief executive Allan Kilavuka.

He adds that the rightsizing process “is necessary to ensure the long-term sustainability of Kenya Airways”.

“We need to make the right decisions today for the sustainability of the business tomorrow, hence the decision to shrink now in order to grow in future and emerge on the other side of the crisis a leaner, more efficient airline.”

The cutbacks are being planned as the airline reports half-year revenue nearly halving to KSh 30.2 billion ($279 million) on the back of passenger numbers declining to 1.1 million – 55% below the same period last year. Pre-tax losses at the company were KSh 14.4 billion for the first half-year, against KSh 8.6 billion in the same period of 2019.

Cirium’s data shows that by available seat kilometres, a measure of capacity, the carrier operated around 2-5 million per day throughout August, down from around 40 million last year.

“The situation continues to be difficult even as we gradually resume our operations, mainly due to the depressed demand for air travel, with recovery to 2019 levels expected to take between three to four years,” says Kilavuka.

“The scale of this challenge requires substantial change so we are in a competitive and resilient position to address the impact of Covid-19, withstand any longer-term reductions in customer demand and any economic shocks or events that could affect the airline.”