Chile’s LATAM Airlines will equip its fleet of Airbus A320ceo-family narrowbodies with an Airbus-supplied system that reduces fuel burn by automating an “optimal” engines-at-idle descent.

The “Descent Profile Optimisation” function, which comes as an update to the A320’s flight management system, enables A320s to “descend from cruise altitude using only idle engine thrust”, Airbus says. 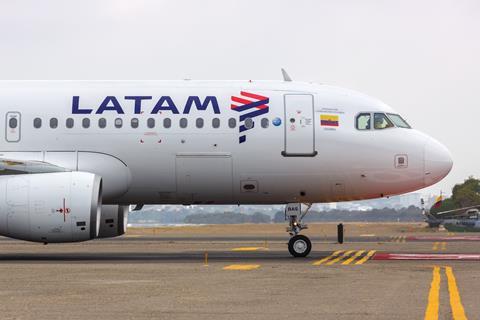 That can avoid pilots having to throttle up to level off, as they typically now do at various stages during descent.

Airbus will begin delivering the updates (which come in “equipment kits”) to LATAM before year end, with deliveries to wrap up in early 2022.

The Toulouse airframer says some 200 of LATAM’s A320ceo-family jets will get the update. The airline and its affiliates have some 240 A320-family jets in service and storage, according to Cirium fleets data.

Airbus offers the system as a software update for first-generation (“ceo”) A320s and A330s; second-generation A320neos and A330neos are delivered with the technology. Some 100 Airbus jets globally have already received the update, the airframer says.

The company says it is talking with other customers about adopting the technology, but it declines to specify which airlines.

Airbus says the technology can save an average of 70kg (154lb) of fuel per flight. That equates to more than 20,000t of fuel saved annually for LATAM’s A320s.