Mesa Air Group on 2 March announced a conditional agreement with London-based Gramercy Associates to launch a joint venture to operate Mesa’s Bombardier CRJ900 aircraft on passenger or cargo routes in Europe by the end of 2021.

The Phoenix-based parent company of Mesa Airlines would apply for a new air operator’s certificate to qualify for capacity purchase agreements or ACMI deals with carriers in Europe. Mesa would own 49% of the partnership with Gramercy, whose managing director is Tony Davis, the former chief executive of both Singapore-based Tiger Airways and the now-defunct UK carrier Bmibaby. 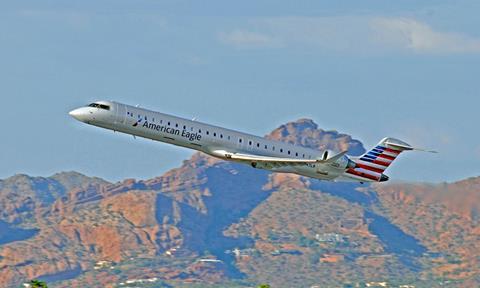 “We are very excited at the potential to expand our regional business overseas,” Mesa chief executive Jonathan Ornstein states.

The regional carrier has 50 CRJ900 aircraft in service, along with 13 parked or in storage, Cirium fleets data shows.

Capacity purchase agreements have been profitable for Mesa during the pandemic as American Airlines and United Airlines make fixed monthly payments for the regional carrier to operate flights on their behalf. Mesa still has to strike a balance to help its cash-strapped mainline customers by allowing these fixed payments to be deferred and counted as revenue at the end of their contract terms.

Mesa has diversified its business during the pandemic to include air freight operations. The carrier has leased three Boeing 737-400 freighters as part of a contract to fly cargo for DHL Express through 2025 from Cincinnati/Northern Kentucky International. Ornstein has said expanding the company’s cargo business will take time but if all goes well the carrier could operate 10 or 12 aircraft for DHL by 2022.