Aer Lingus chief executive Lynne Embleton insists there is no strategic retreat from the Irish regions but that restructuring is required as a result of the Covid crisis, which has inflicted around €1 billion ($1.2 billion) in damage on the airline.

Embleton, the former IAG Cargo chief executive who took the helm of the Irish carrier in April, today appeared in front of an Irish parliamentary transport committee. Her appearance was set against the backdrop of the airline’s decision in May to close its crew base at Shannon and following the hit to regional routes from the recent collapse of Stobart Air. The latter had been operating franchise flights, predominantly UK domestic routes from Belfast, on its behalf. 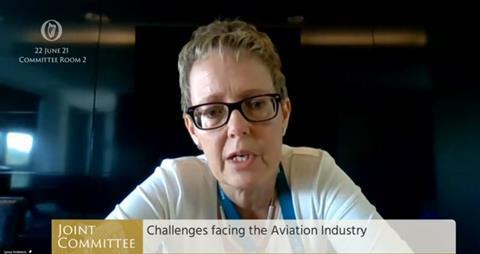 Aer Lingus, together with British Airways regional unit BA CityFlyer, has moved to operate some of these routes in the short term. But longer-term talks are taking place with Emerald Airlines, the Irish start-up which had already won a tender to take over the franchise flights from the start of 2023.

“We have stepped in to operate the majority of the Stobart routes up until at least the end of August,” says Embleton. “These are thin routes, smaller markets, they are best suited to smaller aircraft. So the suitability for these routes is for an operator with regional aircraft and that’s why we are in dialogue with Emerald. Those discussions are progressing well, but not yet concluded.”

Much of the questioning of Embleton surrounded the decision to scrap its cabin crew base at Shannon, announced in May together with temporary cuts at Cork and a review of its ground-handling requirements at the two airports. That in turn came as the Irish carrier battles heavy losses incurred during the crisis.

“We will not be reversing that decision. It is the right decision,” Embleton says of the Shannon base closure.

“The structure of the amount of flying and the schedules that we are able to fly from Shannon simply didn’t support an ongoing crew base in a way that is cost-effective. When I look at restoring flights… across the Aer Lingus network, the best chance of getting aircraft up in the air is having a cost base that allows us to drive cash back into the business… and a travel policy that encourages passengers to fly.”

But she adds: “There is no strategic retreat from Shannon [or] from the regions. The closure of the Shannon base is intended to support our ability to profitably and sustainably fly out of the regions.”

Embleton highlights the impact the sustained crisis has had on the carrier, estimating that a combination of losses incurred during the crisis and lost earnings amounts to a hit of close to €1 billion.

“No company can withstand a billion of euros of damage and not make changes and adapt their business. We have to adapt our business. The changes we are making, we are doing it because the situation requires it,” she says.

She notes that of its 19 long-haul aircraft, “we have very few of our aircraft working very hard” and that some will require spending to bring them back into service.

“Some of the decisions we have in front of us are do we have confidence that spending the money to get those aircraft [back in service] is a sensible thing to do in the near-term, in the medium-term,” she says.

Part of the challenge, and a regular theme of Embleton’s comments, is that impediments to travel need to be cleared before demand – and hence connectivity – can return. Ireland, which had imposed strict travel restrictions during the pandemic, is now lifting the ban on non-essential travel from 19 July. But restrictions remain, including quarantine for non-vaccinated visitors from the UK and a lack of reciprocal travel rules for Irish visitors to the USA.

”We had an optimism when the announcement was made on 28 May [by Ireland], and we were pleased to see many of the changes that were announced and the opening up of travel from 19 July,” she says.

But Embleton adds: “The cumulative impact of the ongoing restrictions does mean our enthusiasm has been dampened and it is looking like too little, too late to really have a significant bounce to restore connectivity… in the near term.”

Embleton notes the biggest inefficiency the carrier currently faces is a lack of scale, given the limited travel demand amid current restrictions, but she also warns of the long path to returning to pre-pandemic levels of activity.

”I think we will be smaller for some time to come,” she says. ”This has had a serious impact on the airline and it will take a long time to fully recover.

“If I look at Aer Lingus now, we are still burning cash. That’s not the end of our problems. We need to repay the debt, pay the interest, restore the balance sheet. We need to have the money to pay for aircraft and the capital associated with that.

”So the pathway to restoring connectivity and getting the airline back to financial health is a long one.”