Addressing the UN climate change conference COP26 in Glasgow on 2 November, Johnson cited the global target for SAF to make up 10% of aviation fuel usage by 2030 – which was adopted by 60 companies in the World Economic Forum’s Clean Skies for Tomorrow Coalition in September – saying everyone should be “far, far more ambitious” when it comes to de-carbonising the sector. 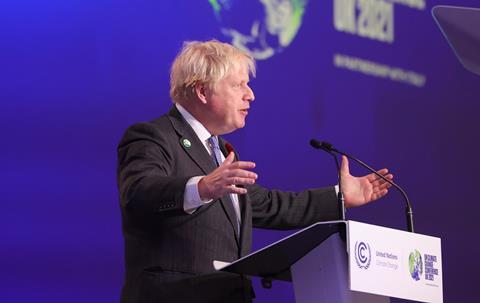 Johnson also acknowledges, however, that aviation is “a tough nut to crack” when it comes to shifting away from fossil fuels. He recalls the first non-stop transatlantic flight by John Alcock and Arthur Brown in 1919, claiming the sector has ”made virtually no progress technologically” since then.

That is why, Johnson explains, aviation is a key focus in a newly announced global plan to speed up the adoption of ‘clean’ technologies.

As part of a long list of initiatives unveiled on 2 November, the ’Breakthrough Energy Catalyst’ programme aims to raise “$3 billion in concessional capital to catalyse up to $30 billion of investments in bringing down clean technology costs and creating markets for green products for green hydrogen, direct air capture, long-duration energy storage and sustainable aviation fuel”, the UK government says.

The UK has pledged £200 million ($272 million), alongside a similar amount from Microsoft founder Bill Gates, specifically aimed at speeding the adoption of SAF.

Pointing to Gates in the COP26 audience, Johnson says: “Bill and I agreed jointly to spend £400 million to solve the problem of guilt-free aviation.”

Airline association IATA recently set out a potential roadmap for commercial air transport achieving net-zero CO2 emissions by 2050. That timeline was even less ambitious than the Clean Skies for Tomorrow Coalition’s, with SAF use only reaching 5.2% by 2030.