‘Risk must be rebalanced’ across industry: LOT operations chief

Suppliers such as aircraft manufacturers, lessors and MRO providers must make a greater contribution to shouldering the financial risk borne by airlines amid the air transport crisis, in the view of LOT chief operating officer Maciej Wilk.

“What we see today is that airlines are begging their states for support, and this money will not only be used for the airlines to survive,” said Wilk during the MRO TransAtlantic conference on 27 October. “This money will deliver revenue to the whole industry.”

He argues that while airlines have been immediately affected by the decline in travel demand, suppliers have been “protected” by contractual clauses in service agreements and – thanks to higher profit margins than airlines before the crisis – larger cash reserves.

“It cannot be like this anymore in the future that MROs, OEMs, lessors, all other parties are protected… from all the risk,” he adds.

“It must not only be airlines that carry the ultimate cost of the crisis… The whole risk in the industry must be rebalanced. We are all in this together, and all of us must contribute to getting out of this crisis.”

GA Telesis chief executive Abdol Moabery, who participated in the same panel discussion, identified a role for companies such as is in easing the burden on airlines. “We as suppliers will have to figure ways to support the airlines where inventory is on our balance sheets… so that their balance sheets aren’t burdened with significant [volumes] of inventory,” he says.

Echoing the argument of LOT’s operations chief, Moabery observed: “If they [airlines] can’t be profitable, we also won’t survive.” 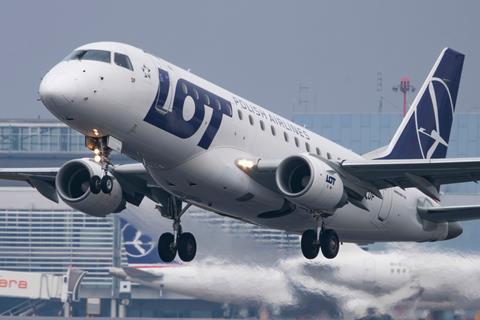 Wilk predicts an “extremely difficult” winter season, as the Polish flag carrier does not expect recovery in demand before April 2021. When airlines started to ground fleets amid the coronavirus outbreak across Europe in March, he says, LOT’s leadership foresaw straight away that the crisis would last at least a year.

He foresees that even if demand recovers, airlines will struggle to deliver profits as ticket prices will be under pressure amid “enormous overcapacity” in the market.

LOT currently operates around 40% of its pre-crisis capacity. Wilks stresses that the airline has not parked 60% of its fleet, but rather has reduced aircraft utilisation.

“If airlines collapse then it’s game over for everyone,” he warns, recapitulating his argument. “It is really high time for all of us in the industry to contribute.”