The discussions involve whether the Saudi Arabian government will grant US airlines the same air-cargo rights sought by Saudia, according to an 8 December filing by the airline with the US Department of Transportation (DOT). 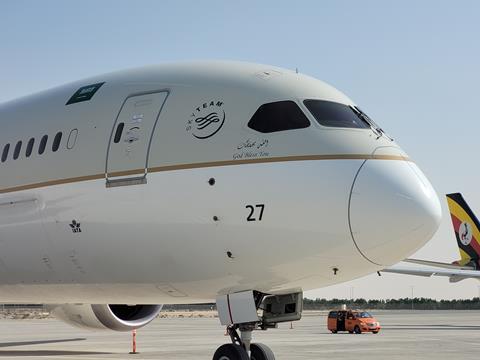 Saudia kicked off its planned US cargo expansion in December 2021, when it requested authority from the DOT to fly “seventh freedom” all-cargo flights between Liege in Belgium and New York or Chicago.

“Seventh freedom” air rights, found in air transport treaties, permit an airline from one country to fly between two other countries without the flight coming from or travelling back to the home country.

Saudia’s request would allow it to sell cargo transport between Liege and the USA. The airline already flies to Los Angeles, New York and Washington, but does so without a stop.

In its request, Saudia had argued that the cargo route would benefit US industry by helping alleviate supply chain bottlenecks. “Because of the delays encountered at various US seaports, many companies have decided to ship certain cargo by air freight rather than sea freight,” Saudia said.

But the move met immediate opposition from US cargo carriers, including Atlas Air, FedEx and UPS. They asked the DOT to deny Saudia’s request unless the Saudi Arabian government provides US carriers the same privilege.

In the 8 December filing with the DOT, Saudia’s attorney said the airline “is continuing to engage in further consultations with the government of [Saudi] Arabia” about the possibility of it granting US airlines seventh-freedom rights.

“Saudi Arabia and the United States are still discussing these issues,” the filing added.

For that reason, Saudi Arabia requested the DOT delay its decision by 90 days. The airline has, on three previous occasions, requested 90-day extensions for the same reason.

Neither the DOT nor Saudi government immediately responded to a request for comment.