Juneyao Air, Spring Airlines and Shandong Airlines said in Chinese stock exchange filings over the weekend that they expect to report a combined loss excluding non-recurring items of at least CNY1.17 billion ($181 million) and as much as CNY1.38 billion. 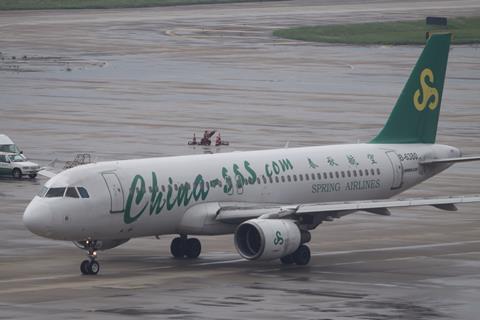 This pales in comparison to the combined loss excluding non-recurring items of at least CNY88.6 billion and as much as CNY104 billion expected by Air China, China Eastern, China Southern and Hainan Airlines.

Hainan Airlines, whose parent HNA Group’s creditors are seeking to put that group into bankruptcy and reorganise it after years of financial difficulties including trouble paying aircraft lease rentals, will contribute the bulk of the losses. The Haikou-based carrier expects a full-year net loss of CNY58-65 billion for 2020.

Shanghai-based Juneyao Air is expecting a full-year loss excluding non-recurring items for 2020 of CNY420-490 million, according to a a 30 January filing to the Shanghai Stock Exchange.

The airline said that traffic dropped off a cliff in 2020 due to the impact of the Covid-19 pandemic, with large numbers of domestic flights cancelled and a large number of refunds issued during the Chinese New Year period.

“As a result of the substantial reduction in international flights, domestic and foreign aviation companies are facing a huge business test,” it says.

Meanwhile, Jinan-based Shandong Airlines expects a full-year loss excluding non-recurring items of CNY212-260 million in 2020, according to a 30 January filing to the Shenzhen stock exchange

When non-recurring items are added, that forecast becomes a loss of CNY222-271 million.

However, it expects an operating profit of between CNY940 million and CNY1.15 billion for the same period.

Shandong said it adopted several measures including “scientific” capacity adjustment and “continuous cost reduction” to minimise the impact of the pandemic. However, the summer travel market, which is its main source of profits, was “severely impacted”.

Back in Shanghai, Spring Airlines, a local rival to Juneyao Air, is predicting a loss excluding non-recurring items of CNY538-629 million in 2020, according to a 30 January filing to the Shanghai Stock Exchange.

Including non-recurring items, it expects the loss to reach CNY735-846 million.

Like Juneyao and Shandong, Spring blamed the Covid-19 pandemic for some of its losses. However, it noted that investment losses from Spring Airlines Japan, its joint venture in Japan with Japan Airlines, caused it to record an impairment.

Subtracting that impairment, Spring could actually report a net profit of up to CNY102 million.

“Due to the continuing impact of the Covid-19 pandemic, international trade and tourism activities within Japan and with China have dropped significantly. This has caused a huge impact on the air transport industry,” it says.

“The 2020 Tokyo Olympics in Japan will also be postponed. Therefore, Spring Air Japan’s domestic and international business has suffered a huge impact.”