Casey Murray, president of the Southwest Airlines Pilot Association (SWAPA), is calling for a vote to authorise a potential strike in the wake of the carrier’s operational collapse during the peak of holiday air travel.

Members of the pilots’ union will begin voting on 1 May, and their votes will be counted at the end of that month. The union represents nearly 10,000 pilots.

“It is not a decision we have taken lightly, but given the trajectory of our current leadership group, we have little faith in the stability and future of our airline,” Murray said on 18 January. “We believe that 1 May provides a date that allows our union time to prepare and gives our customers time to book elsewhere.” 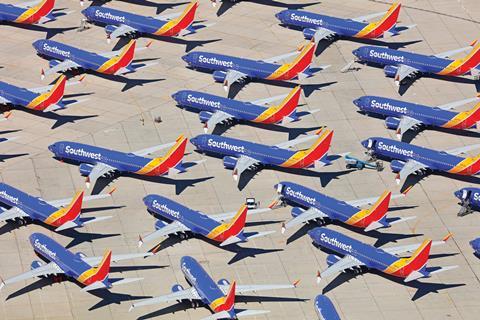 In calling for the vote, Murray cites “the utter lack of meaningful progress on a contract negotiation, with scheduling work rules and information technology asks in particular, that has been ongoing for more than three years”. The union’s most recent collective bargaining agreement with the airline was ratified in November 2016 and became amendable in September 2020, according to SWAPA.

Murray also pointed to the carrier’s calamitous year-end performance as fierce winter weather and ageing crew-scheduling software snowballed into some 16,700 cancelled flights from 21-31 December, forcing the airline to completely reset its network. Southwest estimates the meltdown cost it between $725 million and $825 million, including lost revenue and reimbursing customers for air fares, hotels and travel.

“I think it is best to consider what our customers have been through over the past several years and the past several weeks,” Murray says. “It was the lack of discussion or commitment by our leadership team to rectify these issues for our passengers and our pilots that drove us to make the decision to carry forward on this path afforded to us by the Railway Labor Act.”

A potential pilot strike is just the latest front for the Dallas-based discount carrier as it takes heat from lawmakers, regulators, customers and investors. On January 12, a class-action lawsuit was filed on behalf of Southwest shareholders based on allegations that the company downplayed the potential for its ageing crew-scheduling software to derail its operations.

The lawsuit alleges that Southwest violated federal securities laws by downplaying or ignoring “serious issues with the technology it used to schedule flights and crews and how the company stood to be affected worse than other airlines in the event of inclement weather”.

Southwest says it is upgrading its crew recovery system to “not only solve current and future schedules, but also provide the ability to optimise established schedules as we revise them during irregular operations”. The carrier has also hired consulting firm Oliver Wyman to assess its performance at the end of 2022, it said in a 16 January letter to customers signed by CEO Bob Jordan.

“We are currently budgeted to spend more than $1 billion of our annual operating plan on investments, upgrades and maintenance of our IT systems,” the letter reads. “The recent disruption will accelerate our plans to enhance our processes and technology.”