Sun Country Airlines says it continues to “grow sensibly through the recovery” as it posts a small loss for the fourth quarter of 2021.

The Minneapolis, Minnesota-based ultra-low cost carrier on 7 February says it lost $602,000 in the final three months of the year, compared to a loss of $8 million in the same quarter in 2020.

For the full year, Sun Country achieved a profit of $77.5 million – including government financial aid – compared to a loss of $3.9 million in 2020. 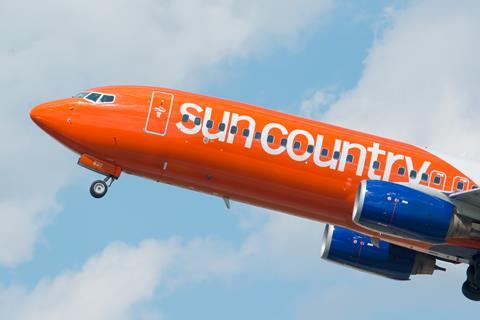 Sun Country continues to “grow sensibly” through the recovery

“We closed out 2021 in a very strong way,” says chief executive Jude Bricker. “The company is in a tremendous position, and we are excited to see it outperform in 2022 and beyond.”

That said, the carrier, like its peers, had to deal with staffing headaches due to increased illness as a result of Covid-19, winter weather delays and a software system hiccup in the late part of the quarter.

“Similar to other airlines, our operations were challenged by harsh weather conditions and staffing outages driven by the Omicron variant,” says Dave Davis, the airline’s chief financial officer. “In addition, we faced a technology issue that impacted us during the peak Christmas holiday travel period. Demand was modestly softer than expected in December, which we believe to have been due to the Omicron variant.”

In 2021, the airline’s capacity as measured in available seat miles was up 39.8% from the year earlier. Its fourth-quarter capacity was a 35.8% over the last three months of coronavirus-plagued 2020.

”Beginning in mid-January, we have seen a very strong rebound in bookings,” Davis adds.

The company will hold an analyst call on 8 February to give more details on its fourth quarter results.