Lufthansa subsidiary Swiss is planning to reduce its fleet, after incurring a Swfr84.1 million ($86.1 million) operating loss in the first quarter.

That compares with an operating profit of Swfr48.3 in the same period of 2019. 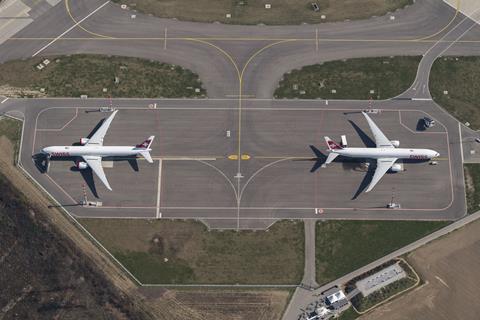 Swiss says it will be “resizing its fleet by deferring deliveries of short- and medium-haul aircraft” and is “further considering withdrawing older aircraft earlier than planned”.

In April, Lufthansa disclosed an agreement under which Switzerland’s government will back loans of Swfr1.5 billion to avert an insolvency of Swiss and Edelweiss.

Swiss’s finance chief Markus Binkert states that the government loan guarantees, financial support from Lufthansa, and cost-saving measures “will enable us to bridge any liquidity gap”.

He adds: “We will be doing everything in our power to repay such loans with interest with all possible speed.”

Swiss’s chief executive Thomas Kluhr foresees that the gradual resumption of flights will be a “step-by-step process that will take two to three years”.

Having provided a skeleton service from Zurich and Geneva from 23 March until 31 May, Swiss intends to operate 15-20% of its original schedule this month and to further grow its schedule depending on demand.

“We will be steadily expanding our services from Zurich and Geneva, with the aim of restoring the direct intercontinental connections that are so vital to Switzerland’s economy, politics, society and tourism sector,” Kluhr states.