The UK Advertising Standards Authority has ruled that Ryanair’s “Jab and go” television advertisements must not be broadcast again in forms that attracted more than 2,300 complaints.

The advertisements – which were broadcast around the turn of the year – began with an image of a medical syringe and a vial labelled “VACCINE”, according to the ASA. A voice-over stated that “Covid vaccines are coming, so book your Easter and summer holidays today with Ryanair.

“One million seats on sale from £19.99 to sunshine destinations in Spain, Italy, Portugal, Greece and many more. So you could jab and go!”

According to the ASA, footage showed, among other situations, “groups of people in their twenties and thirties enjoying the holiday destinations”.

It condensed 2,370 complaints about the advertisements into three issues and upheld two of them.

First, it describes as “misleading” the implication that most of the UK population would be successfully vaccinated against Covid-19 by spring/summer 2021 and would be able to holiday unaffected by travel or other restrictions related to the pandemic.

Second, it agrees with complaints that the messages, and particularly the claim “Jab & Go”, were “irresponsible”.

On the latter issue, it “considered the ads encouraged people to behave irresponsibly by prompting those who were not yet eligible to be vaccinated to contact GPs or other NHS services in an attempt to arrange vaccination, at a time when health services were under particular strain”.

It did not uphold complaints from those “who felt the ads trivialised the ongoing restrictions and effects of the pandemic on society and individuals” and found the advertisements to be “offensive”. 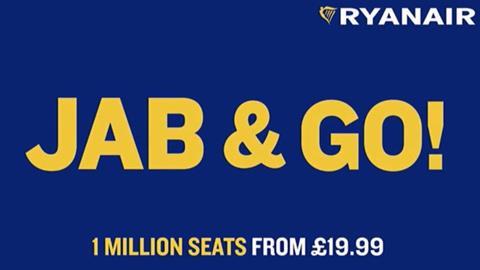 The television advertisements were described as ‘misleading’

“Whilst we acknowledged that many viewers had found the tone of the ads distasteful, we considered they were unlikely to cause serious or widespread offence,” the ASA states.

The authority outlines a long Ryanair response to the complaints.

“Ryanair felt there were important contextual factors to take into account when considering the ads, including the situation at the time the ads were first broadcast, the general awareness of the public concerning the Covid-19 vaccination programme and the constantly changing restrictions relating to international travel,” it says.

The ASA continues: “Ryanair considered that the average UK consumer was familiar with information about the vaccines, their rollout schedule, travel restrictions and the inherent uncertainty in the travel industry. In that context they believed the ads’ claims that ‘vaccines are coming’ and that ‘you could jab and go’ were not misleading to consumers, who would be able to make an informed decision about whether they wished to book flights.”

The Advertising Standards Authority for Ireland was similarly critical of Ryanair’s advertising campaign in a recent draft ruling, according to reports.

While announcing its third-quarter results on 1 February, Ryanair said it expects a gradual recovery in intra-European travel in the spring, followed by a “substantial” return to flying through the summer, as northern Europeans return to holiday destinations.