The chief executives of several UK airlines have issued a joint call for the country’s government to outline an “urgent roadmap” for the reopening of air travel, while at the same time demanding an aviation support package “that recognises the urgency and scale of the danger now facing our sector”.

Their letter to UK prime minister Boris Johnson, dated 26 January and issued via industry body Airlines UK, comes amid reports his government will today announce a requirement that travellers from certain ‘high-risk” countries must quarantine in hotels on arrival in the country, at their own expense.

It states that while carriers have “consistently and fully supported the government to do what is right in the face of this pandemic”, the UK already has “some of the toughest border restrictions on international arrivals anywhere in the world”.

Noting that “policy should be based on evidence”, the airline chiefs claim to have seen “no compelling scientific evidence that introducing a policy potentially of blanket quarantine in hotels is necessary in addition to measures only recently introduced”.

And with the crucial mid-year months in their sights, they ask for a meeting with Johnson to discuss “a clear set of conditions… allowing for the easing of all travel restrictions”. 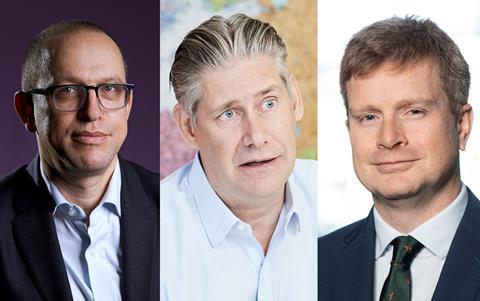 Weiss, Lundgren and Doyle are among the UK airline chiefs demanding government support for the sector

They continue: “This roadmap is vital for retaining consumer confidence and securing the future of UK aviation as we approach the critical summer trading period.”

The airline chiefs add that the UK should draw upon “the tools available now to us, including testing, working in concert with vaccine roll-out at home and internationally” in formulating a plan to reopen travel markets.

Concurrently, amid a national lockdown, existing travel bans and the prospect of further restrictions, “the time has now come for a bespoke support package that can get UK airlines through this crisis”, they state.

While airlines have been able to access support available to most UK businesses during the Covid-19 pandemic – notably the country’s furlough scheme – there have been no sector-specific measures.

Highlighting their precarious financial situations, the airlines cite the “dramatic impact that restrictions – both current and should hotel quarantine be introduced – will continue to have both on UK airlines and the wider UK economy”.

The short-term effects of ”an effective border closure” include “risks impacting vital freight and PPE supplies” and would “jeopardise tens of thousands of jobs and the many businesses up and down the country that depend on aviation”, they suggest.

Responding to the same reports regarding the UK’s intention to introduce stricter border controls, IATA said on 26 January that while it recognises “the government must take the steps it considers necessary to protect public health”, further restrictions “will plunge the aviation and travel industry deeper into crisis”.

The airline industry body poses a number of “vital questions” regarding the UK’s hotel quarantine proposals, including around the scientific basis for the decision, the economic impact assessment, and the practicalities of introducing such measures.

“If ministers cannot answer these key questions, it damages public confidence that there is a coherent strategy for suppressing Covid-19 and a roadmap in place for returning to normal life,” IATA states.

UK home secretary Priti Patel is due to make a statement to the UK parliament regarding the hotel quarantine proposals on the afternoon of 27 January.

The Airlines UK letter to Johnson was also signed by the chiefs of Loganair, Jet2, Titan Airways, CargoLogicAir and AirTanker.