United Airlines will continue flying humanitarian missions as part of the Civil Reserve Air Fleet (CRAF) “over the next several days at least”, the carrier says.

The Chicago-based airline and other US carriers have deployed jets under the US government’s CRAF programme in support of evacuations from Afghanistan.

United says on 24 August that one Boeing 777-300 with 340 military personnel, civilians and Afghan evacuees landed at Washington’s Dulles International airport from Ramstein Air Base in Germany on 23 August. 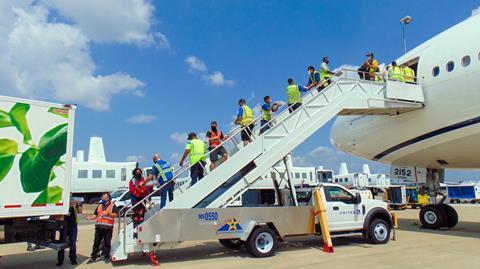 “We’ve had more than 8,000 United employees come forward looking to assist with these missions just over the last few days,” United says. These include pilots, flight attendants, technicians, employees who speak Dari, Farsi and Pashtu – languages native to Afghanistan and the region.

On 22 August, the US military asked airlines to participate in the humanitarian and diplomatic airlift from Afghanistan. The Department of Defense (DoD) ordered the activation of CRAF, asking airlines to provide 18 aircraft as part of the rescue effort of US citizens and others wanted to escape from Kabul after the previous government fell late last week to the Taliban.

Six major US carriers are providing aircraft and flying missions.

This is only the third time in history that civil carriers have been asked to assist on a military evacuation operation.