As shelter-in-place orders are lifted across the United States, airlines are hoping to inspire traveller confidence by imposing stronger sanctions against passengers who refuse to wear face coverings on board their aircraft.

In addition, some carriers are introducing health questionnaires and temperature checks as well as extending the amount of time they will keep the middle seats open, thus allowing their passengers more personal space inside the aircraft as the summer travel season gets underway. 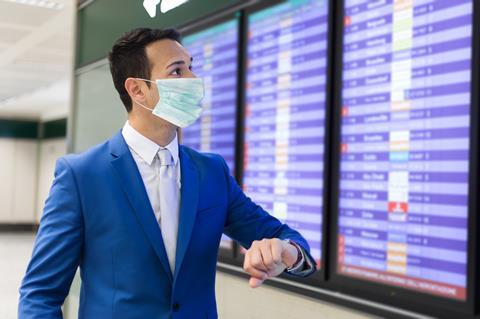 On 15 June American Airlines and United Airlines both sharpened their language around the face-covering requirement for all passengers inside of aircraft. Non-compliance could land the offending customer on a no-fly list for a significant amount of time.

“American already enforces this [face-covering] policy at the gate and will deny boarding to customers who don’t comply,” the Fort Worth-based airline writes on 15 June. “American now may also deny future travel for customers who refuse to wear a face covering. American made this change after working in conjunction with Airlines for America on an industrywide response.”

Chicago-based United, meanwhile, says that from 18 June, “any passenger that does not comply when onboard a United flight will be placed on an internal travel restriction list. Customers on this list will lose their travel privileges on United for a duration of time to be determined pending a comprehensive incident review.”

The airlines hope that this stronger language, in addition to enhanced cleaning protocols, high-grade air filters on aircraft and other measures like staggered back-to-front boarding and limited in-flight service, will bring passengers back to air travel more quickly.

“US airlines are very serious about requiring face coverings on their flights. Carriers are stepping up enforcement of face coverings and implementing substantial consequences for those who do not comply with the rules,” said A4A chief executive Nicholas Calio on 15 June.

A4A said it has also “encouraged” the Transportation Security Administration (TSA), which oversees security screenings at 450 US airports, to conduct temperature checks. So far these are not being widely performed in the US.

Canada, however, is taking a more structured approach to temperature checks. Canadian prime minister Justin Trudeau said last week that temperature screenings will be mandatory for all passengers traveling to, from and within the country in the coming weeks. The government will introduce the checks in phases, and will have a comprehensive system in place across all of its major airports by the end of July.

On 16 June, Dallas-based Southwest said it would also be introducing a health declaration for passengers, and vowed to keep the middle seat free on all flights through 30 September. Previously it had said it would maintain that policy through July.

The customer health declaration is “an additional layer” of security that every passenger will have to acknowledge during the check-in process, Southwest says.

“Employee and customer safety is, and always will be, the carrier’s top priority from check-in to deplaning the aircraft,” the airline writes. The middle seats will be left free in order “to provide customers more personal space onboard and promote physical-distancing.” The airline added that customers may still pick their own seat, it will not block or direct seating, and families or those traveling together may sit together if they wish.

Low-cost carrier Frontier Airlines requires its customers to sign a similar “health acknowledgement” and began on 1 June taking the temperature of every guest before they embark on a Frontier aircraft.

The TSA says on 16 June that it screened 534,528 passengers the day before. That is the highest number of travelers since the outbreak of the global pandemic earlier this year but only 20% of the number screened on the same day a year earlier.