Saab's Gripen E remains on track for delivery to the Swedish and Brazilian air forces from 2019, with the Swedish company's first prototype having recently passed a significant performance milestone.

Aircraft 39-8 was flown at supersonic speed for the first time on 18 October, with test pilot Marcus Wandt describing its performance as "very smooth" during a sortie flown over the Baltic Sea. "The aircraft sustained supersonic speed for a number of minutes, whilst carrying out manoeuvres," the company says.

Powered by a GE Aviation F414 engine, the Gripen E will be capable of "supercruise" performance: sustaining supersonic flight without the use of its afterburner.

"The Gripen E flight test programme is going extremely well, whilst the delivery schedule to our two customers remains our key focus," says Jonas Hjelm, the head of Saab's aeronautics business area. Aircraft 39-8, the first of the airframer's three prototypes, has accumulated more than 20h of flight time since its debut on 15 June, 2017. 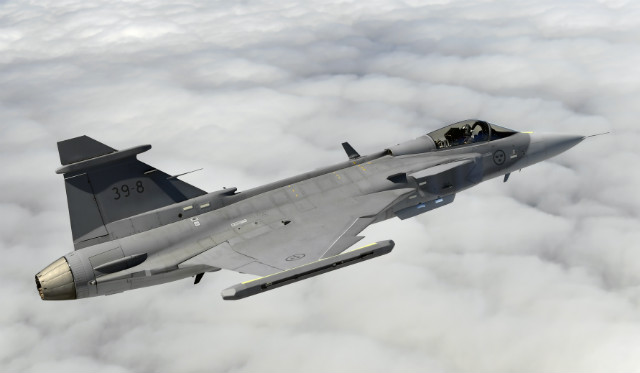 Sweden has so far committed to acquiring 60 Gripen Es, while Brazil has ordered 28 single-seat examples and eight in a two-seat configuration, being developed in co-operation with Embraer.

Speaking during an earnings presentation on 24 October, Saab chief executive Håkan Buskhe commented: "The programme in Brazil is going to plan," with the nation's first serial example now in production.

Meanwhile, Buskhe says he believes Saab "should be able to settle a couple of Gripen orders within the next 16 months". The company is offering to deliver new-build C/D-model examples to potential buyers in Eastern Europe, while Botswana has also shown interest in the type.