How coronavirus crisis is changing requirements for aircraft interiors

The 2001 Al Qaeda attacks on the USA sparked a crisis in aviation, crushing demand and pushing several well-known airlines into bankruptcy. The fact that the terrorists had used hijacked airliners for their deadly missions also transformed the way we fly, with tightened security checks on the ground and, on board, locked cockpit doors and even armed, undercover air marshals. 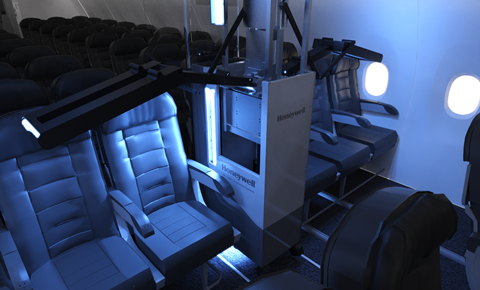 Nineteen years on, coronavirus is having the same effect, although this time the business impact is even harder, and long-term changes to the travel experience are likely to be more marked. After 9/11, the worry was what weapons a fellow passenger might be concealing. This time, the fear is pathogens – lurking unseen on hands, surfaces and in the air.

Before the pandemic, the interiors sector had been – like much of commercial aviation – in upbeat mood as it readied for its big April convention, AIX in Hamburg. With airliner production rising and carriers keen regularly to upgrade their passenger offering to distinguish themselves from competitors, the order books for many cabin product manufacturers were bulging. 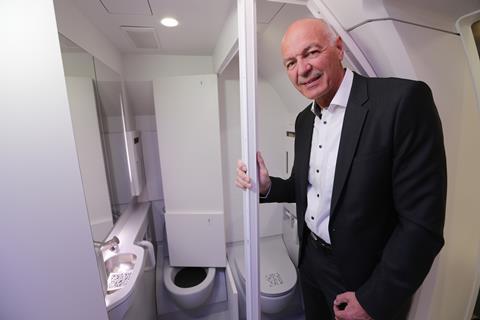 The collapse in airliner deliveries changed that. “We are expecting a levelling out of demand at around 60% of early 2020 levels, and then slow recovery until 2023, when we might arrive at some sort of new normal,” says Rainer von Borstel, chief executive of cabin equipment specialist Diehl Aviation, one of the market’s key players. But he cautions: “The path ahead is full of uncertainties.”

Despite a spike in flying in the northern summer season and a return of some long-haul services, von Borstel notes that traffic will take time to translate into demand for interior products. “Airlines are still reluctant to take new aircraft or place orders. Nor do they have an appetite for retrofit shipsets,” he warns. “We will see recovery in our market only with some delay after rising traffic figures.”

Mark Hiller, chief executive of Recaro, the biggest independent seat supplier, says his company faced a sharp fall in demand in March and April and began reducing output. He expects a fall in revenue for the German manufacturer of up to 60% this year compared with 2019. However, he is optimistic that for the interiors sector things might at least have bottomed out. 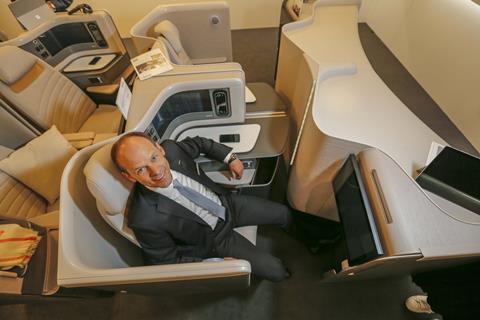 Hiller believes the worst might be over for the interiors market

“We are now beginning to see airlines [who had postponed deliveries] pull some of them forward,” he says. “For next year, we will not have the strong first quarter that we saw this year, so it could be that 2021 is on a similar level to 2020. For subsequent years we are anticipating the return of strong growth from low volumes.”

Robert Machtlinger, chief executive of Austrian cabins specialist FACC, whose products include overhead bins and interior structures, expects revenues in 2021 to remain roughly at this year’s levels, with growth resuming in 2022. Helped by new products due to come on stream, he believes that “we will return to our pre-corona levels in four or five years”.

However, there is an expression “never waste a good crisis”, and one of the opportunities for the interiors sector as airlines emerge from lockdowns and restrictions on flying is products that improve on-board hygiene – or, just as importantly, help convince the public that it is safe to travel again. The nascent segment could prove an important one at the 2021 AIX.

Innovations range from seats that create shields or other physical barriers between passengers to ultraviolet cleaning systems that eradicate viruses from cabin surfaces. There are meal distribution systems that avoid as much contact by crew as possible to – from HAECO’s US-based cabin solutions unit – retrofit kits that allow passengers to operate lavatories hands-free.

The HAECO line-up includes an electric, foot-controlled switch for flushing, an infrared, sensor-based waste basket lid, and a refillable hand sanitiser dispenser, which can be fitted anywhere in the cabin. Around 10 airlines and one OEM have so far expressed an interest, says David Kelly, vice president, marketing & strategy for the Chinese MRO-owned firm.

Tapis has teamed with two other US interiors companies on a “solution for safer travel” that blends anti-microbial seat coverings and plastics designed by Tapis and Simona Boltaron together with Molon Labe’s “staggered” seat design. The latter includes a headrest with air vents, that can be rotated sideways to open up seats between travelling companions or act as a physical barrier.

“We wanted to create a story, to make customers feel safer on-board,” says Tapis sales director Matthew Nicholls of the collaboration. “Even when we’ve found a vaccine for Covid-19, people will worry about what is coming next. We think the industry will start to look at cabins in a very different way – the impression of cleanliness will become more important.”

One of the ways this could manifest itself, he believes, is in seat materials. “We are beginning to see the reduction and removal of fabric. Viruses can nest in stitching. Plastic is easy to clean,” he says. “The only way to truly clean fabric is to remove it, and that can only be done every four to six months. But you can disinfect an easy-clean surface at least once a day, and possibly every flight.”

The trend for certain airlines to free middle seats to boost passenger confidence will be short-lived because it is unviable, Nicholls maintains. “Centre-seat blockers were a bit of a rushed thing at the beginning of the crisis,” he says. “Airlines have no cash at the moment, so they will only ultimately look at what will give them a long-term return on investment, such as seat coverings.”

The way passengers view on-board meals could also alter as a result of the coronavirus. Galley and monument manufacturer AIM Altitude actually began developing its ARCA galley system last year as a space-saving concept, but the pandemic has given the product a whole new impetus, says Helena Teichrib, senior industrial designer based at AIM Altitude’s Auckland subsidiary. 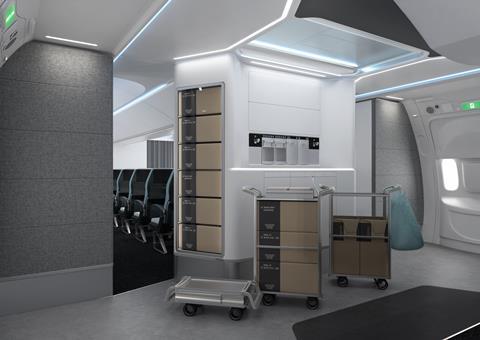 The system is a response to an existing trend by airlines to replace tray meals with boxes, and does away with the need for traditional trolleys by swapping them for collapsible carts. The ARCA galley allows these pre-prepared boxes to be stacked in a special compartment, taking up less space than meal trays, with the fold-away cart sliding underneath.

In the age of Covid-19, passengers will tend to favour boxed meals over a traditional tray-based service as the perception is that there has been less human contact with the food on-board, says Teichrib. “It’s a way of reinventing the whole meal service, and giving the airline a way to differentiate itself,” she says.

Honeywell’s big contribution to the coronavirus-proofed cabin is an ultraviolet cleaning system, based on “hospital-grade technology” and developed in partnership with Dimer, that the Phoenix-based company maintains “significantly reduces” bacteria and viruses on surfaces. Honeywell says that by using the product, the size of a beverage cart, crew can treat a cabin in as little as 10min.

Honeywell surveyed 1,000 regular travellers in May and discovered that a barrier to many returning to fly was the cleanliness of the aircraft interior. “We asked what we could do and they said they wanted technology that could cleanse the aircraft over and above what was done by the regular cleaning crew working quickly,” says James Currier, president of Honeywell Aerospace, EMEAI.

The UV technology is not new, as it is used regularly in hospitals, but it has not, until now, been deployed in aviation, he says. Using lamps attached to articulating arms, the trolley is pushed down the aisle. The product is being used by JetBlue and airlines in the Middle East and Asia and reports are that passengers enjoy the added “level of confidence”, he says.

Czech-owned Aveo Engineering, which specialises in LED lighting, has launched a range of ultraviolet “sanitising lights” that it says destroy viruses, germs and moulds. Veolite attacks the DNA of a pathogen, can be fitted into panels and deployed when the aircraft is empty, says Rick Lindstrom, who runs the company’s Californian site. Crew wearing eye-protection can also use a wand.

Several manufacturers are putting their faith in novel seat designs to win back the trust of travellers. Safran is teaming with UK design house Universal Movement to market a product that creates partitions around economy-class seats by leaving the middle seat of three vacant. The concave padded shells, the same height as the seat, provide privacy as well as protection.

The seat addition is part of a suite of offerings the French company is marketing under a new Travel Safe brand. It includes a removable partition that isolates neighbouring passengers, called Ringfence, a pedal that allows travellers to recline their backrest without using their fingers, and virus-proof coatings for armrests and tray tables.

UK MRO specialist RAS has come up with a simple way of giving economy passengers a barrier between them and their neighbour. Its Personal Protection Window, newly certificated for the Airbus A320 family, is a head-height, clear plastic divider that straps onto the window and aisle seats in a 3x2 configuration, creating a “cocooned environment” around the passenger in the middle. 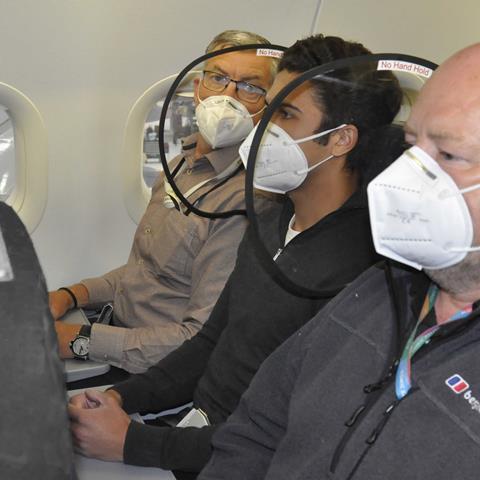 The RAS Personal Protection Window inserts a barrier between passengers

The product can be fitted to a narrowbody in 2h, involves no alterations to the seat structure and does not interfere with seat access or exit during an emergency, says the company’s head of design, Kevin Hann. The Biggin Hill-based company has shipped its first product to an unnamed launch airline customer.

Recaro’s Hiller believes that the after effects of the Covid-19 crisis will include “more robust cleaning regimes”, but also a possible change in the configuration of long-haul cabins. A decline in demand for business class as cash-strapped companies cut travel budgets, coupled with a wish by passengers for more socially-distanced space means “premium economy might be the winner”.

Passenger perception of airline travel could be “forever changed”, says Honeywell’s Currier. “That will change the landscape. A certain level of hygiene is going to become the expectation. Passengers could choose airlines they perceive have deployed technologies to provide a safer environment for them and their family, much as they used to choose an airline for its IFE,” he says.

Diehl’s von Borstel, wonders how passengers’ “long-term behaviours” will change as a result of the pandemic. “We are developing solutions in touchless travel, optimising air flow in the cabin and disinfecting tools based on UV-C light,” he says. “But looking ahead, what will drive consumer confidence in the long-term? No one knows so we will keep on working on innovative technologies.”

Safran Seats executive vice-president, strategy and innovation Quentin Munier thinks cash-hit airlines will not want to change entire seating configurations to attract Covid-wary passengers, even if the crisis lasts two years, because of the expense of switching those layouts back again. However, he says they are anxious to investigate “simpler solutions that help confidence and comfort”.

He believes leisure and even business travel will rebound – as it did after the 2008 financial crisis – as humans are “social animals, not machines”. Video-conferencing worked in lockdown, but is not a long-term answer, he says. However, passengers will have an enhanced awareness of cabin hygiene: “There will have to be effective cleaning,” he says. “But that cleaning will also have to be visible.”

HAECO’s Kelly suggests that the flurry of hygiene products arriving on the market is a “win-win” for the interiors sector, maintaining production and providing a “revenue bridge” for suppliers at a time when demand for traditional products is sluggish, but also helping to restore confidence among the public and therefore boosting the recovery.