Called GX+ North America, the product will make use of both company’s satellite networks, which they say will let them offer global broadband connectivity to aircraft. 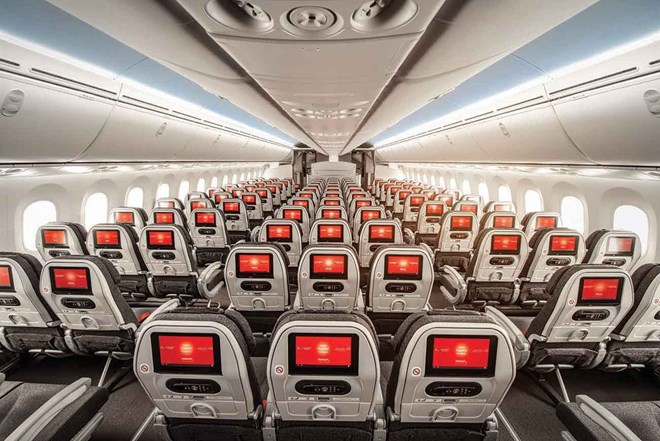 The cabin of a Boeing 787 operated by Avianca, an Inmarsat customer.

Notably, the companies stress that their partnership will let them provide airlines with sufficient bandwidth to accommodate heavy demand over North America, where they say other connectivity systems have proved unable to keep up.

North America has “been the market that is the most saturated and [has] the greatest penetration and use of in-flight connectivity”, says Inmarsat senior vice-president of in-flight business and Americas market capture Niels Steenstrup. “We saw a need for something that was strong and more robust and [has more] more capacity.”

GX+ will make use of London-based Inmarsat’s Global Xpress network, which consists of five satellites, and the Jupiter network of Hughes, a Maryland subsidiary of Colorado-based EchoStar.

The Global Xpress network covers much of the globe, and Inmarsat plans to bring on additional satellites and to expand coverage to other regions, including the poles, says Steenstrup.

The Jupiter network consists of the EchoStar XVII and EchoStar XIX satellites, via which Hughes offers broadband coverage over North America, Canada and Mexico, according to Hughes.

Both networks transfer data over Ka-band.

GX+ will be able to accommodate data-hungry air travellers “even… over the busiest airport hubs”, the companies say.

Inmarsat will provide GX+ to airlines, and manage the product. The companies expect to begin “prototype flights” in 2020 and to make the product commercially available to airlines in 2021.

The companies have not yet secured airline customers, but GX+ has “generated a lot of interest”, Steenstrup says.

He insists GX+ will be unrivalled among competing connectivity providers because the network will offer high-speed, satellite-based connectivity both over North America and around the globe. The system will quickly switch between satellites, with little or no service interruption, as jets enter and leave North American coverage areas, says Streenstrup.

“We found we can transform the market to have something specifically for North American customers.”

He stresses that such technology will be needed to accommodate airlines’ ambitions to provide cost-effective, high-speed and buffer-free data connectivity to all their passengers on all their flights.

“We will be able to provide enough capacity to all the aircraft in service [so] that if every passenger wanted to stream content simultaneously, they would be able to do so and there wouldn’t be any buffer,” he says.

Hughes provides in-flight connectivity to commercial, government and private aircraft. Some 750 commercial aircraft, including those operated by Flydubai, Icelandair, Norwegian and Southwest Airlines, carry its technology, according to Hughes.

Steenstrup says airlines have continued to explore new connectivity technology amid the pandemic.

“Airlines are taking a surprising amount of interest in planning the future of the passenger experience, perhaps in spite or because of Covid,” he says. “We are seeing an uptick of usage among passengers in Covid.”

The pandemic has led to increased interest in technologies such as “touchless” food and drink ordered, and electronic lavatory queuing, he says.