Panasonic Avionics is highlighting a greater propensity for passengers to stream content as one of the learnings from a recent airline trial offering unlimited Wi-Fi connectivity on board. 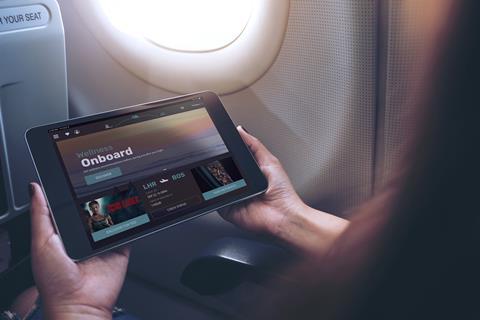 Connectivity specialist Panasonic notes that passengers watched an average of 41 more minutes of streamed content and that data consumption almost doubled from an average of 1.6GB before the trial to 3GB.

Panasonic Avionics’ vice-president of In-Flight Connectivity services, Jeff Sare, describes the initiative as more of an “extended demonstration” than a trial.

“It’s not about ’here is a sales pitch’. It’s about demonstrating both for our customers and for ourselves, this is what we can do, and if we do this, this is the outcome.

That the trial took place amid the continued backdrop of the coronavirus pandemic also brought its own learnings around the influence the crisis has had on consumer behaviour.

“There seems to be more of an interest in bringing your own device and an avoidance-of-touching-things attitude,” Sare says.

“Early on, as people came back to flying, we had fewer users but the per-individual use rate went up,” he explains.

“People are seeing all this in the world and so are staying more connected than they might have otherwise. They want to see what’s going on in the news.”

Sare notes the greater uptake for streaming services on board, notably for Netflix and YouTube content, also reflects similar trends seen on the ground since the pandemic began.

“Our comfort with the technology is driving opportunity and growth, for us and the airlines,” he says.

“There are finite physical limits to everything, but that doesn’t mean that you can’t have an unlimited plan from a connectivity perspective that doesn’t make sense and cannot be supported,” he explains.

“The unlimited plans are less about the total volume that you consume and more about setting up the network so that it doesn’t matter what you consume in that particular moment of time, so that service is better, there is a smoother video stream and so you get a better download speed at the moment that you need it, without some ugly surprise bill later or some impact on the passenger next to you.

“There was a time when everybody paid [for mobile] by the call and by the bit and almost nobody does that anymore. It’s the same infrastructure in the background, the same technology with the same physical limits, but what telecoms have done, what satellites are doing, what we are doing, is managing the network in a way which allows us to get the service we want with more surety and fewer surprises.”

For Panasonic – and other suppliers to airlines – there will doubtless be a shift in dynamics to reflect the post-pandemic climate, with greater financial pressures on carriers.

“What you are starting to see at airlines [is] a drive for all the normal sorts of things but maybe more pointed in revenue generation, in bring-your-own-device, in touchless [technology], and in the automation or connection of things,” he says, noting this is expanding beyond passenger applications.

“It’s a drive where we always thought it would go, but now some of those things are more pointed because they have to be,” Sare says. “Airlines are having to be more specific about their strategies and more cautious about where they invest.”