The current industry slump may push some aerospace suppliers out of business, and the recovery may come slow due to public wariness of close quarters in aircraft cabins, say industry experts.

However, those experts remain optimistic about the sector’s longer-term prospects, saying the industry will recover and that the downturn may spark innovation and revenue diversification.

“There will be, certainty among the smaller companies, consolidation… They won’t have capital to get through this,” Jack Pelton, chief executive of Experimental Aircraft Association and former Cessna CEO, says during a FlightGlobal webinar on 16 April.

“Diversification – that’s the lesson we always learn coming out” of downturns, he adds. 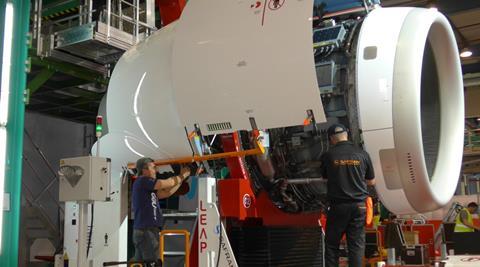 Some suppliers, having seen their aerospace revenue shrink by half, might simply walk away from their aerospace businesses, choosing to focus on other non-aviation business units, Williams says.

Aerospace suppliers typically require more time to ramp up operations – perhaps 12 to 18 months more – than do airframers, Williams adds. And the expense of ramping can be significant, meaning some suppliers might hang on through the downturn only to run out of cash while getting back on their feet.

“You can go bust on the other side of the curve,” Williams says.

He suspects systems suppliers might fare best, being generally well funded and having strong earnings, better access to capital and side revenue from aftermarket work.

Aerostructures companies, which often have tighter margins and more-disperse supply chains, could struggle more. “Those are the ones I would lose the most sleep over,” Williams says.

But companies that keep idle employees on payroll face the same problem, as skilled workers, when unchallenged, are likely to take jobs elsewhere, he adds.

Pelton warns of slashing spending on research and development, which is a common, almost kneejerk, reaction to downturns. But companies that defund such investment might struggle to compete in later years.

“You pay for it down the road,” Pelton says, adding that product development spending will “separate the winners and losers long term”.

Pelton also cautions companies to be realistic about their production capabilities in the early days of the eventual recovery, saying they must avoid promising more than they can deliver.

“You certainly are not going to have the capacity to produce what you used to,” Pelton says. “You can overcommit… on the backside of this.”

Even amid extreme uncertainty, Williams urges executives to communicate frequently with business partners and employees.

“If you think you are 60% right, then you should go with that, and try to keep everyone aligned,” he says. “There is temptation to only communicate when you have all the answers. If you are not careful you will end up with a very ragged and uncontrolled situation.”

Pelton doubts the aerospace industry will recover as quickly as it fell, noting that years of increasing production rates created oversupply. Since January the global in-service fleet of Boeing and Airbus aircraft has slipped some 62%, from 20,000 to 7,540 jets, according to Cirium fleets data.

Also, Pelton says “paranoia” among the public about contagion will take time to overcome.

“It’s not going to be a sharp” recovery, he adds. “I think it’s going to be much slower.”

But Pelton and Williams remain confident in the industry’s future, and suspect the downturn will spark innovative technologies, such as those related to emission reduction and aircraft sanitation.

“This segment attracts some of the brightest minds. It will figure itself out. It will reinvent itself,” Pelton says.