Textron Aviation officials are upbeat ahead of this year’s NBAA, as the company’s new super midsize jet, the Cessna Citation Longitude, makes its official post-certification debut at an international airshow.

Textron Aviation officials are upbeat at this year’s NBAA, as the company’s new super-midsize jet, the Cessna Citation Longitude, makes its official post-certification debut at an international airshow.

The Wichita-based airframer hopes its new flagship, which gained type certification from the Federal Aviation Administration (FAA) last month, will be the belle of this year’s business jet ball.

Textron has brought nine aircraft to Las Vegas, including two Longitudes (pictured below), as well as two pre-owned aircraft and mock-ups of the new Denali and SkyCourier turboprops, which are due to join the family in the coming months.

“It’s been an exciting year for us,” said Rob Scholl, Senior Vice President of Sales and Marketing, at a briefing in Wichita in October, citing milestones including the 50th anniversary of the maiden flight of the original Cessna Citation business jet, the 200th delivery of the Citation Latitude, the 500th delivery of the Grand Caravan EX and its showcase project, the Longitude. 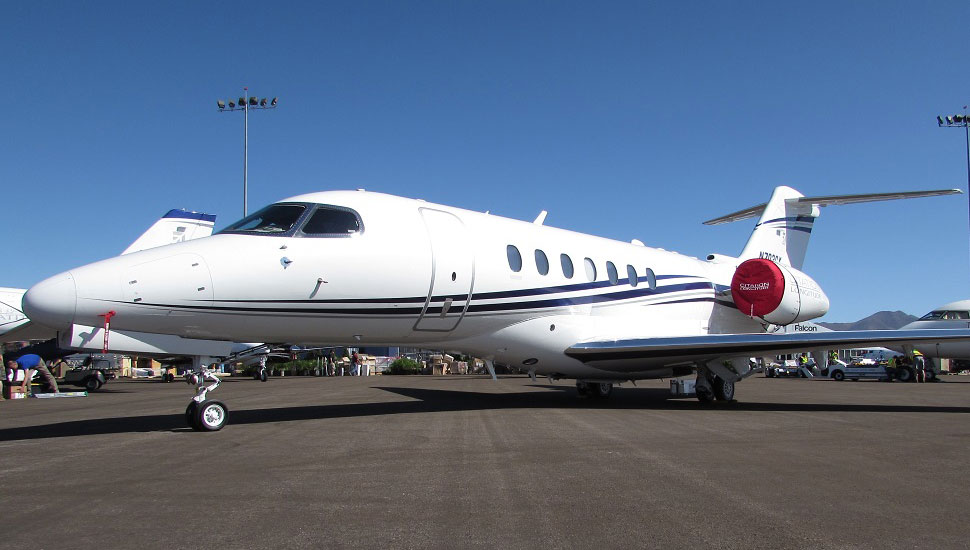 “The engineering and production teams have built an absolutely outstanding airplane,” he said. “This really is a revolutionary aircraft in this space.”

And the company has every reason to be optimistic about the jet’s potential.

NetJets, one of the company’s biggest customers, has 175 options for the Longitude, and the company said it will be delivering its first examples to NetJets later this year. "We have a good backlog and expect to see a lot of success with this aircraft," Textron chairman and chief executive Scott Donnelly told analysts during the company's third quarter earnings call.

But the optimism and confidence in the Longitude is tempered by the suspension in July of the Hemisphere, which was to be Textron's largest Cessna-branded business jet. Launched in 2015, the Hemisphere was billed as the first clean-sheet design in the $30-40 million category for more than 25 years.

The decision to put the jet on hold was triggered by the failure of Safran's Silvercrest engine to meet the requisite performance specifications for the $35 million aircraft – which was specifically designed for the 9,000-12,000lb (40-53kN)-thrust turbofan. The move, for the time being at least, has dashed Textron's hopes of entering the large-cabin segment and capturing the valuable move upmarket at the top of its Citation family.

“For the airframe we wanted to build, we didn’t get what we needed. It may be a great engine, but it wasn’t a match for what we were trying to do,” says Draper. He would not say if the Hemisphere project will ever be revived.

“We are only going to go into that space if we come out with something that truly differentiates itself, and right now we think we need a different engine than what’s out there on the marketplace,” Scholl adds.

Textron Aviation’s two new turboprops, the Denali and SkyCourier, are close to completion and are also attracting a great deal of interest, the company says.

The SkyCourier is planned for both passenger and cargo missions. “It will be a utility airplane just like the Caravan, in a variety of roles,” Scholl says. The company is in discussion with the Department of Transportation about operating the SkyCourier for the Essential Air Service, Scholl says, and the type is also garnering interest from overseas – especially the Asia-Pacific, for island-hopping services.

So far, FedEx is the lead customer for the SkyCourier, with 50 orders and 50 options, Scholl says.

The company is monitoring the overall global economic situation carefully, but at the moment sees nothing that it considers “overly concerning". North America remains the biggest market, and Textron sees some customers delaying decisions into the fourth quarter. “Europe continues to be a little slow compared to historical numbers while Latin America has been a bright spot recently, especially on the turboprop side,” Scholl says.

In addition to the aircraft on display and flying demos, Textron will unveil interactive 3D technical publications at the show’s innovation zone. It is first manufacturer to bring these documents alive in 3D, making maintenance, troubleshooting and servicing more efficient and reducing aircraft downtimes.

Kriya Shortt, Senior Vice President Global Customer Support, says the manufacturer has so far created documents for the Longitude as well as the wiring of the Latitude aircraft. These publications are developed in-house, and will be the standard format for manuals going forward, including for the Denali and SkyCourier.

“The industry standard is two-dimensional drawings, but the 3D views make our technicians more efficient – they are able to zoom in, pan and rotate and get a realistic view of the aircraft and the systems before they start disassembling them,” Shortt says.

Shortt adds that the company is in “really good shape” on the upgrades to the ADS-B out equipment required by the FAA on all business aircraft flying in controlled airspace from 1 January 2020. About 80% of all US Citation aircraft and 60% of King Airs are now compliant. Textron says the numbers in Europe are lower – about 50% and 25% respectively – due to the later deadline of 7 June 2020.

As part of the FAA's NextGen initiative, all business aircraft must be fitted with ADS-B equipment from next year, to allow air traffic controllers to more accurately chart the position of aircraft.

Textron is also using this year’s NBAA to make a statement about alternative aviation fuels, which are gaining significance as the industry works towards carbon neutrality goals. All of its static aircraft at the show will be arriving and departing on a combination of traditional fossil fuel and sustainable fuel made from corn starch, which burns more cleanly.

The broader aviation industry, which accounts for about 3% of global man-made CO2 emissions, has committed to reducing those emissions to half of 2005 levels by 2050. Much of this will be achieved by using alternative fuels in combination with fossil fuels.