Tru describes the simulator as significantly advancing the safety of CL-415 operations at a time when forest fires – including those in Sweden, Greece and the USA – have increased demand for trained pilots.

"It's going to be a simulator with a tremendous impact on the industry," says George Karam, vice-president and general manager of Tru's air transport simulation division. "Once crews start experiencing the fidelity of that simulator, we are anticipating more demand."

Tru already supplies some non-motion, "low-fidelity" CL-series training products. But, the lack until now of full-flight simulators has meant that much CL training occurs in the cockpits of the amphibious aircraft – a complex machine that often operates in technically challenging environments, Karam says.

CL-series aircraft, previously produced by Canadair and Bombardier, have been involved in 40 accidents since 1970, killing 56 people, and half of all CL-415 crashes have occurred during training, Tru says.

"A lot [of incidents] happened during training, which unfortunately led to injuries and fatalities," Karam says. "You are not just training for flying, but also for the missions. The results of that is that there is significant risk for that training."

The new simulator replicates the CL-415's characteristics both in flight and on the water as a "boat", and can recreate various water conditions, Karam says. "You are simulating two different crafts in different states, and in between."

The machine also simulates various types and intensities of forest fires, and related changes in environmental conditions, he adds. 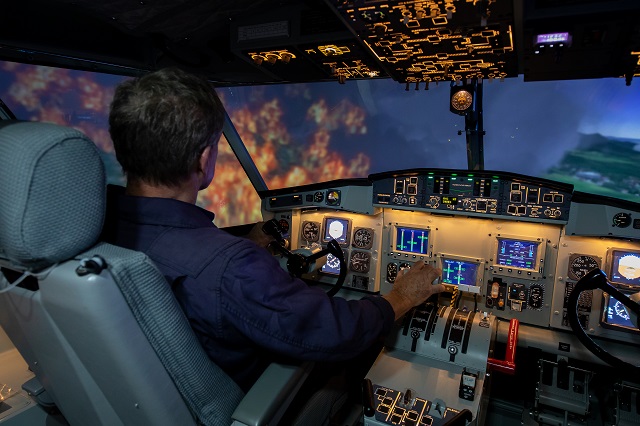 Canada's Viking Air acquired the CL programme from Bombardier in 2016. Some 125 CL-series aircraft remain in service worldwide, operated by several North American and European governments and by firefighting companies, according to Flight Fleets Analyzer.

Viking has said it is considering launching production of another upgraded derivative, dubbed the CL-515.