The US Air Force’s flight training commander has reiterated the need for the service to replace its Northrop T-38 Talons, and outlined how a new aircraft could change its instruction programme.

“We need a replacement for the T-38 for a lot of reasons, [and] it will drive discussions about pilot training,” Gen Robin Rand, head of the Air Education and Training Command, said at the Air Force Association’s Air Warfare Symposium in Orlando, Florida on 21 February. “It’s a good time to have those discussions.”

The USAF has been eager to replace its 430 T-38s, which have been in service for about 45 years, with a “T-X” trainer, but the programme was not funded in fiscal year 2014.

Rand declines to speculate about future funding, but says clarity will come as details emerge about President Barack Obama’s FY2015 budget proposal, due out on 4 March. He says technological advances and modern fighters like the Lockheed Martin F-22 and the still-in-development Lockheed F-35 Joint Strike Fighter make a T-38 replacement necessary.

“There is a requirement for an airplane that can do something the T-38 can’t do,” says Rand. A new T-X would also be cheaper to operate, he adds. “There are more efficiencies out there with a new airplane.” 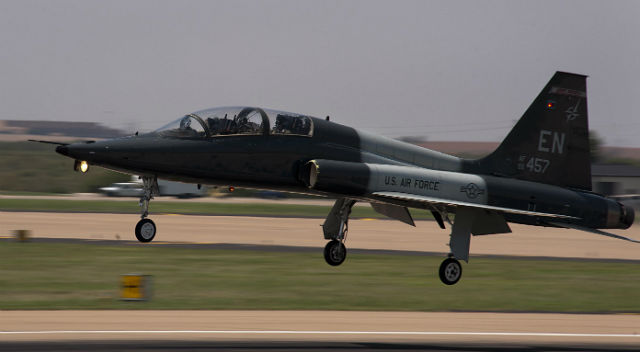 Candidates for the T-X programme include existing designs like the T-50 Golden Eagle, made by Korea Aerospace Industries and Lockheed, Alenia Aermacchi’s T-100 development of the M-346 and the Hawk, proposed by BAE Systems and Northrop Grumman. Boeing has also promoted a new, clean-sheet aircraft to fill the role, teamed with Saab.

Rand says the service’s 120 Raytheon T-1 trainers for airlift and tanker pilots, which the service began flying in 1991, are also in need of updates. But he questions: “Can [we] afford to get a T-X at same time we put a lot of money into T-1?”

Those questions are raising broader discussions about the structure of the service’s training programme.

Decades ago, all USAF pilots followed a “generalised” training programme that included time in both Cessna T-37 Tweets and T-38s. Pilots then entered specialised training tracks for fighters, bombers, transports or tankers.

Because that process put a “lot of wear and tear” on T-38s, the USAF adopted “specialised” training. Now, all pilots receive basic training in some 450 Beechcraft T-6 Texans, which replaced the T-37. Future tanker and transport pilots train on T-1s, and future fighter pilots train in T-38s.

Rand says the service could return to generalised training, with all pilots training in both T-6s and T-38s, or the replacement T-X.

There is also a “blended option”, under which all pilots would start in T-6s and transition to the T-38 or T-X. But future tanker and transport pilots would receive only about 75% of the T-38 course, Rand says.

“Those are the options. They will all work,” he adds.