Tristar A300 crashes near Mogadishu

An Airbus A300 operated by Egyptian cargo carrier Tristar Air crashed near Mogadishu in Somalia on 12 October after attempting to land, the carrier confirms.

Although the aircraft, which had been operating a flight from Cairo, suffered “total damage”, the crew survived the crash, says the general manager in Tristar’s operations center in Cairo.

“All the crew members are safe,” he tells Flightglobal.

A Somali government spokesperson posted on Twitter that the aircraft had been carrying six passengers and crew, and that they suffered “minor injuries”.

The A300 had “been trying to land in [Mogadishu] all evening”, and then crashed at about 19:30 local time near the town of Afgoye, which is about 13nm (24km) west of Mogadishu, according to the government spokesperson. 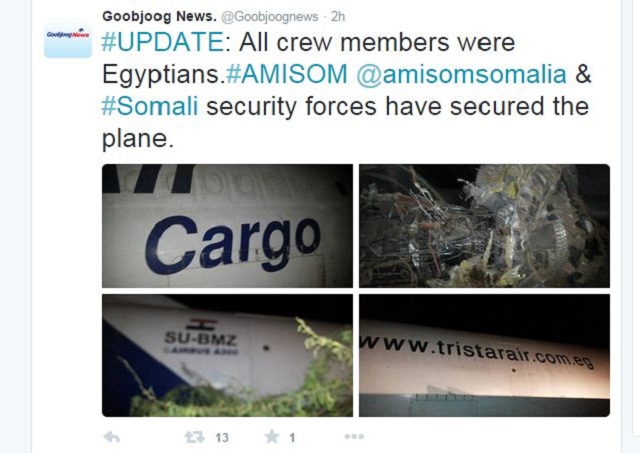 Twitter posts from the African Union Mission in Somalia (AMISOM) say the aircraft was circling but “was unable to land at the Aden Adde airport after several attempts”.

The carrier’s general manager says the aircraft had originally flown from Belgium to Cairo, where it was refueled. A new crew then boarded for the flight to Mogadishu’s Aden Adde International airport, he says.

He adds that the aircraft was carrying food, disputing reports that it had been carrying supplies for AMISOM, a defensive and peacekeeping force.

The general manager would not speculate on the cause of the crash.

“The investigation will start tomorrow or tonight,” he says. “They will…take the black box and see what happened. And then we can know from the investigation team the final result.”

Images of the crashed aircraft show the registration as SU-BMZ. This aircraft is an A300B4-200F powered by General Electric CF6-50C2 turbofans, which was manufactured in 1980 and delivered to Air France in 1981, according to Flightglobal’s Fleets Analyzer database. Tristar had operated the A300 since 2011.