The UK Ministry of Defence has distanced itself from any possible future use of the BAe 146 as a refuelling tanker, following the concept’s recent promotion by BAE Systems Regional Aircraft.

“No assessment has been made of the air-to-air refuelling capability of the BAe 146,” said minister for defence equipment, support and technology Philip Dunne in response to a parliamentary question on 8 October. 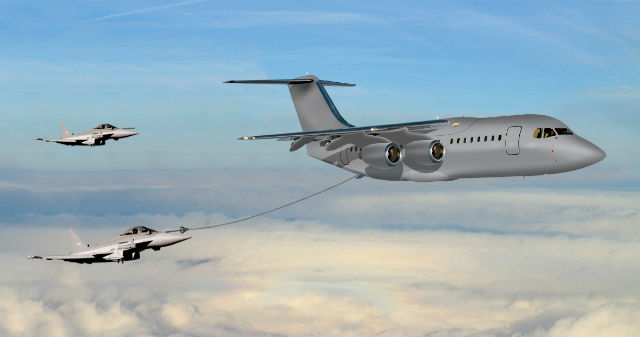 A core fleet of nine Voyagers will replace the Royal Air Force’s remaining Lockheed TriStar tankers and retired Vickers VC10s, with six of the AirTanker-supplied type now in service.

BAE unveiled an offer to modify the 146/Avro RJ regional airliner for the tanker role during the DSEi exhibition in London last month. The company, which has already supplied two military transport-adapted C3-model aircraft to the RAF, says the type could be equipped with a hose drum unit and auxiliary tanks, enabling it to transfer up to 18t of fuel.

A first proximity trial was performed in 2009 using an RAF Hawk T1 trainer to investigate the concept’s feasibility.