Forty-nine Ukrainian military personnel were killed when an air force-operated Ilyushin Il-76MD transport was shot down by pro-Russian militants in the conflict-affected nation on 14 June.

The aircraft, which carried the Ukrainian air force registration 76777, was brought down while on approach to land at Lugansk airport at 00:51 local time. Ukrainian president Petro Poroshenko described the action as a “cynical terrorist attack”. 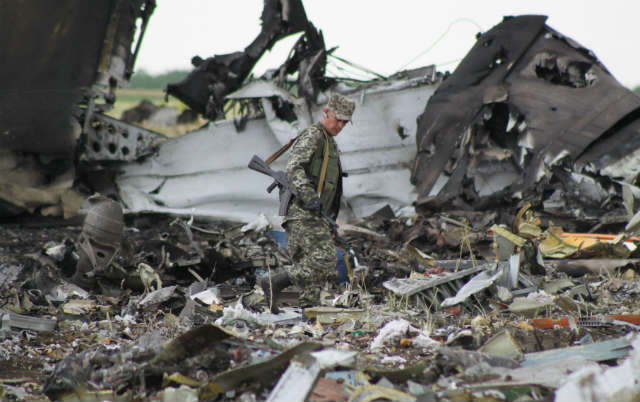 Flightglobal’s Ascend Online database records the destroyed aircraft as having been built in 1988, and reveals its loss reduces the air force’s active inventory of the type to four examples.

The incident took place a day after NATO secretary Anders Fogh Rasmussen expressed concerns that “pro-Russian armed gangs are acquiring heavy weapons from Russia, including Russian tanks”. The availability of such equipment “would mark a serious escalation of the crisis in eastern Ukraine”, he added.

According to Ascend, a total of 65 Ukrainian military personnel have been killed this year when their aircraft were shot down. Such incidents have included the loss of a Border Guard-operated Mil Mi-8 transport helicopter near Sloviansk on 29 May, in which 14 people were killed, and the loss of an army Mi-24 assault helicopter and its two-person crew on 2 May, also near Sloviansk.