The Airbus Military A400M is to be equipped with 200 electro-mechanical actuators designed to actively cancel airframe vibration generated by the transport aircraft’s four eight-bladed propellers. 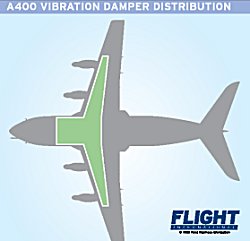 Greenford, UK-based Ultra Electronics will supply the active noise-control system. About half of the 200 actuators will be placed in the fuselage within the propeller plane and immediately behind it.

The actuators will be powered by the A400M’s electrical system and attached to the fuselage skin. They will detect and analyse noise and vibration using on-board microprocessors and generate counter-vibrations at the propeller-passing frequency of 80-90hz and related harmonics. Where the noise is greatest the actuators will be clustered more densely.

“The system is purely for passenger comfort, it’s not for addressing fatigue,” says Ultra Electronics’ marketing director Rob McDonald. “The propeller frequency is such that you can hear and feel it. It’s like being at a concert and standing near a speaker.”

He adds that, although Airbus has been using noise simulation software for the last two to three years, the true noise profile will only be known once flight testing begins.

However, the most dominant noise sources in the aircraft are expected to be the propellers.

Although the actuators can act individually, they will be connected via a broadband network to a central processing unit. This uses tonal control software and will analyse the overall noise from the engines and alter the performance of individual actuators.

The system is based on anti-noise technology developed for Bombardier’s Q Series regional turboprops.