The rate of accidents involving flights operated by commercial US airlines inched slightly higher last year, though 2014 marked the fifth consecutive year that no passengers were killed on scheduled flights operated by US commercial airliners, according to new data released by the National Transportation Safety Board (NTSB).

In 2014, US airlines operating scheduled and non-scheduled flights under so-called part 121 regulations suffered 28 accidents out of more than 9 million departures, according to a preliminary report from the NTSB.

Still, 2014 was a year in which there were no accidents that the NTSB deemed “major” or even “serious”, meaning none resulted in fatalities to passengers or crew. Though two crashes in 2013 killed a total of nine crew members, no passengers have been killed on US airliners since 12 February 2009, when a Colgan Air Bombardier Q400 crashed near Buffalo, killing 50 people.

By comparison, the global airline fatal accident rate in 2014 was one event per 2.38 million flights, according to figures released in January by Ascend.

But 2014 had its share of accidents involving US carriers, including 13 that caused injuries and 15 that substantially damaged the aircraft, the NTSB reports.

There were no complete hull losses among US carriers in the year, the NTSB reports. 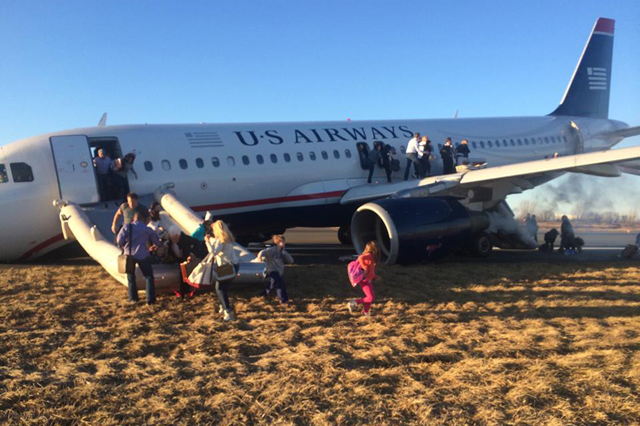 Among the most-notable incidents was the aborted takeoff in Philadelphia of US Airways flight 1702 on 13 March 2014, which reportedly injured at least one passenger.

Shortly after becoming airborne, the pilots abandoned the takeoff. The nose wheel hit the runway first and collapsed, and passengers evacuated after the aircraft came to a halt on the edge of the runway, according to reports.