The US Navy continued a three-year campaign to build the Lockheed Martin F-35C’s sea legs with the third and last shipboard deployment of the development test phase for the carrier-based variant starting on 14 August.

The third carrier deployment since November 2014 for the single-engined fighter is focusing on expanding the F-35C’s flight envelope with take-offs and landing, including various configurations of external stores, a semi-automated landing mode called Delta Flight Path and take-offs and landings in cross-wind conditions. 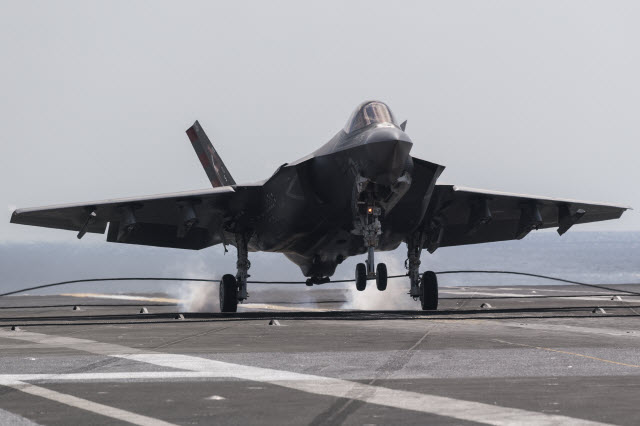 The F-35C also is being scrutinized for how its redesigned arresting hook performs the George Washington’s flight deck. In the first round of carrier testing aboard the USS Nimitz in November 2014, the F-35C’s resculpted tailhook performed flawlessly, with no unplanned missed landings in 122 attempts, according to a 2016 report by the Pentagon’s Office of Test Evaluation. Such testing includes some planned missed approaches to evaluate how the aircraft performs during a go-around.

But a follow-up deployment last October aboard the USS Dwight D. Eisenhower resulted in seven “bolters” in 62 attempted carrier landings. Those results may have been skewed, however, because one of the four arresting wires on the Eisenhower’s deck was out of service during the demonstration.

In dozens of attempted landings from 14 August to 17 August on the Washington, the F-35Cs had reported no unplanned missed landings, according to the F-35 joint programme office. 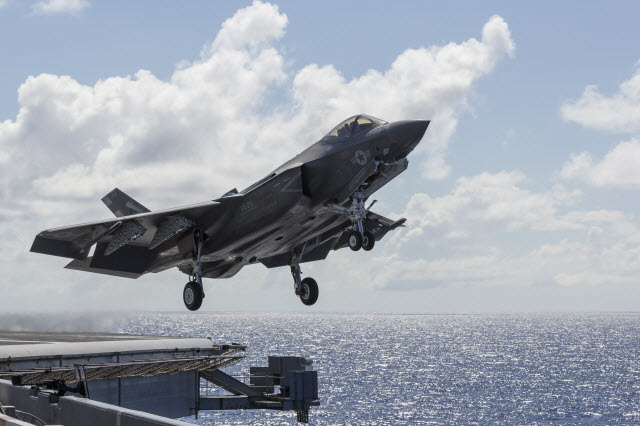 Carrier suitability also evaluates how the F-35C is maintained at sea. Operations require maintainers to perform checks of engines and auxiliary power units (APUs) below-deck inside the carrier’s hangar. The functional APU in the F-35C — Honeywell’s integrated power package (IPP) — vents hot exhaust upward from the top of the fuselage. The navy’s maintainers are monitoring whether the heat damages the hangar ceiling and how the emissions escape from within the hangar bay.

The F-35C also introduces a new innovation in flight controls for cold-sweat-inducing carriers landings. Under the “Magic Carpet” programme, the navy integrated direct lift controls into the throttle and coupled that with a new Delta Flight Path law to partially automate the glideslope path, with the pilot required to make only minor corrections after “calling the ball” on final approach to the carrier.

Passing the carrier qualifications is one of the final steps in the overall F-35 programme’s 15-year-old system development and demonstration (SDD) programme. The F-35C is scheduled to become the last of the three variants to achieve initial operational capability in 2018, following operational clearances for the US Air Force’s F-35A in July and the Marine Corps’ F-35B a year before. 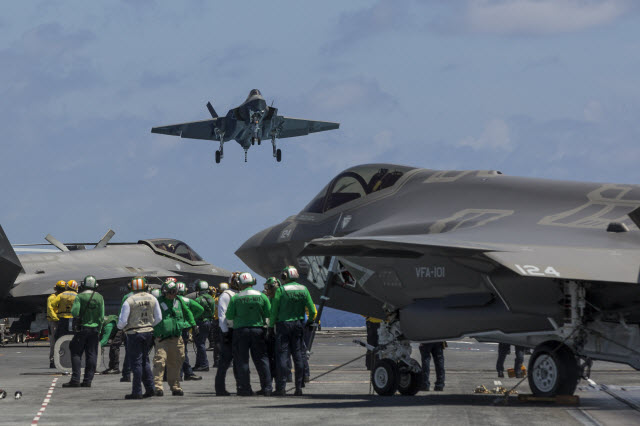 So far, only the US Navy and Marine Corps plan to buy C-model, with the former taking 260 and the later 80. With longer and folding wings, strengtehend landing gear and additional control surfaces, the F-35C is optimised to be operated at sea.

The 13.1m (41ft) wingspan is longer than the F-35A and F-35B by 2.4m, but has recently hit a snag. Last October, a front spar of an F-35C in a durability test rig cracked at 13,731 simulated flight hours, or nearly 6,000 flight hours beyond the type’s required service life. Even so, the programme office is developing a fix using conventional methods, such as cold working and local strengthening. After 20 more hours of durability testing, two new cracks were discovered on either side of a fuselage bulkhead on the F-35C. Those cracks were still under investigation as of last March.

All photos courtesy of Lockheed Martin