US Air Force Lockheed F-117A Nighthawks will launch their final mission on 21 April, when the iconic stealth fighter flies into retirement, 27 years after the aircraft was first flown in total secrecy.

Four F-117s of the 49th Fighter Wing will leave Holloman AFB in New Mexico and make an overnight stop at the stealth fighter's birthplace, Lockheed's Skunk Works in Palmdale, California.

They will then fly to Tonopah airfield in remote Nevada, where the F-117s were flown secretly and only at night until the stealth fighter's existence was publicly acknowleged in November 2008.

At Tonopah, the F-117s' wings and tails are being removed and the aircraft are being stored in protective hangars. "A portion of the fleet will be rapidly recallable to fly again," says the USAF.

Retirement of the F-117 ends a chapter in the development of stealth that began with the Skunk Works' Have Blue technology demonstrators, which began flying in December 1977.

These pioneered the arrowhead-like planform and facted airframe, designed to minimise the aircraft's radar cross-section by preventing energy being reflected back to the radar.

Work on the F-117 began in 1978, the first full-scale development aircraft flying in June 1981 at the highly secret Groom Lake base north of Las Vegas in Nevada. 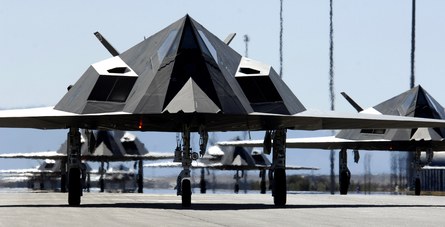 To save time and money, the F-117 used off-the-shelf equipment, including F404 engines and cockpit controls and displays from the F-18, and fly-by-wire computers from the F-16.

The F-117 became operational in 1982, flown by the 4450th Test Group from an isolated airfield constructed in the Tonopah Test Range, north of Groom Lake.

Flights were conducted in secret, and only at night, until November 1988, when the F-117's existence was publicly acknowledged so the stealth fighter could begin operating with other USAF aircraft. 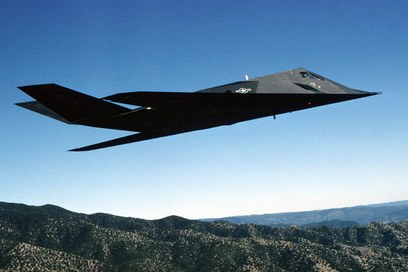 The Nighthawk made its combat debut in December 1989, conducting the first strikes against Panamanian forces in Operation Just Cause. F-117s went on to make the opening attacks of Operations Desert Storm in 1991, Allied Force in 1999 and Iraqi Freedom in 2003.

Originally designed to carry a pair of 2,000lb laser-guided bombs internally, the aircraft was upgraded to carry satellite-guided munitions and hard-target penetrators.

In 1992, the F-117s became part of the 49th Fighter Wing based at Holloman. Of the 59 aircraft built, seven were lost - including one that broke apart during an air display and another shot down by Serbian forces.

Increasingly costly to operate and maintain, the F-117 is being retired to save money for modernisation, the USAF says. Holloman's 49th Fighter Wing will re-equip with Lockheed Martin F-22A Raptor stealth fighters. 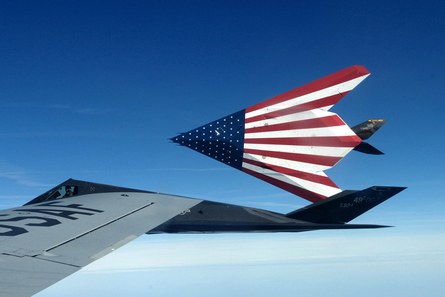