The Polish air force's fleet of Sukhoi Su-22 combat aircraft is to be upgraded, defence minister Tomasz Siemoniak has announced. The service has a current fleet of 26 M4-model strike aircraft and six UM3K-standard two-seat trainers, all of which are operated from Swidwin air base.

A full decision about the type's operational future will be taken in mid-March, with two options under consideration.

One such option would be to modernise all of the aircraft and retain them in service for the next three years. The other would upgrade only one squadron's fleet of 16 fighters, and keep these in use for 10 years. The scope of such work has not been revealed, but would likely include the installation of new avionics and cockpit displays, along with an airframe overhaul by the WZL-2 depot in Bydgoszcz. 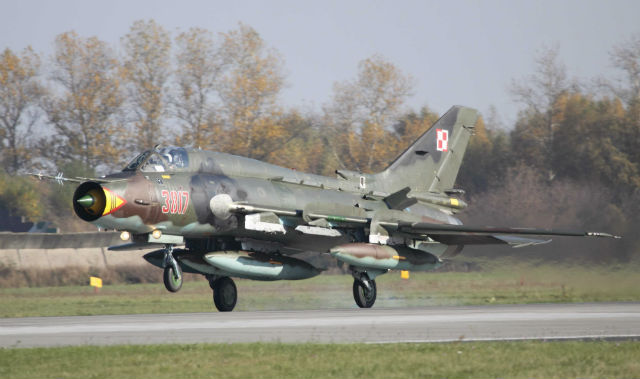 Modernising the Su-22 will give Warsaw more time to select a successor. A few years ago the nation said the type would be replaced by either second-hand Lockheed Martin F-16s or new-generation Lockheed F-35s, but a lack of money prevented either idea from advancing.