Information released by the US National Transportation Safety Board (NTSB) today  reveals that a combination of weather, handling and possibly a broken steering cable could have been factors in the runway excursion of a Continental Boeing 737-500 at the Denver International Airport the night of 20 December.

Continental Flight 1404 was taking off from Denver at 1818h local time that night when pilots lost directional control as the aircraft accelerated through approximately 90kt (166km/h) airspeed. The aircraft departed the left side of Runway 34R, coming to rest in a drainage basin and catching on fire. All 115 passengers and crewmembers escaped, though 41 were injured. 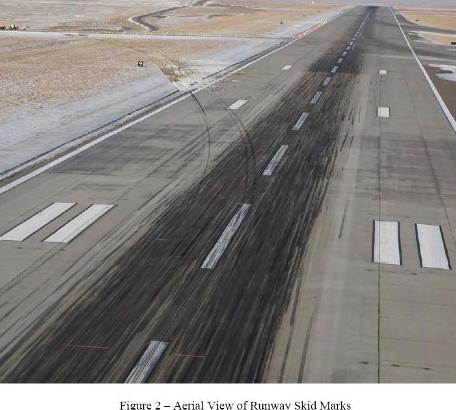 Environmental conditions loomed large for the crew as wind from 290 degrees at 24kt with gusts to 32kt created a strong left crosswind during the takeoff roll, a disturbance that left uncorrected would have pushed the aircraft’s tail to the right and nose to the left due to the “weathervane” effect.

According to an analysis of the airport’s low-level windshear alerting system, compiled by the National Centre for Atmospheric Research, crosswind velocities during the takeoff run varied from approximately 25kt to 30kt, slightly below the winglet-equipped Boeing 737’s maximum demonstrated crosswind component of 33kt.

Pilots generally counteract the wind on a crosswind takeoff using the aircraft’s rudder once speeds are high enough, as called for in Continental Airlines procedures and as stated by the accident pilot to the NTSB during an interview.

“However at about 90 knots (prior to the monitoring pilot’s 100kt call out), I felt the rear end of the aircraft slip out hard to the right and the wheels lose traction,” stated the aircraft’s captain, who was performing the takeoff. “It had felt like a slick patch of runway, or a strong gust of wind, or a combination of both, had pushed the tail hard to the right. The aircraft tracked left and I countered with right rudder to full right. This was ineffectual.”

In the flight data recorder reports released today, one of dozens of factual reports that include crew statements, cockpit voice recorders and meteorology, rudder pedal position data however show that the rudder was close to neutral when the aircraft accelerated through 90kt. The time-history plot below shows the aircaft's speed data on top and the rudder pedal input in green on the bottom. The crosshairs indicate where the speed reaches 90kt. Note that there was one pedal input after the mark, followed by a period of roughly 5s of little rudder input.

A simulator study, performed by the NTSB’s operations and human performance group however, revealed that removal of rudder inputs at 90kt in wind conditions similar to those experienced by Flight 1404’s resulted in similar excursions to the left side of the runway.

It’s not clear yet if a broken cable found in the aircraft’s nose wheel steering (NWS) system would have had any effect. Pilots steer an aircraft on the ground at lower speeds using the rudder pedals, which directly control the nose gear through control actuators, or at taxi speeds using the cable controlled NWS, which connects to the “tiller” wheel on the left side of the cockpit. At takeoff speeds, directlinonal control comes largely from the aircraft's rudder, which the pilots control with the rudder pedals.

A materials analysis of the removed broken NWS cable by the NTSB found internal wear “typical of internal wear at a pulley location” in the cable in the vicinity of the pulley where the break occurred. The cable was also “kinked” at several locations, with a single wire strand fractured at the worst kink locations.

According to Boeing, the broken cable in that location could have caused the nose gear to rotate 7 degrees to the left. Seven degrees of wheel turn is also the maximum amount of nose wheel steering provided by full deflection of the aircraft’s rudder pedals, according to the NTSB.

The NTSB did not include any analysis of the materials released today, nor did it provide for interviews with the investigating team, which is continuing its analysis.