Airbus has performed the first flight of a modified C295 military transport in support of the EU’s Clean Sky 2 initiative to lessen the environmental impact of aviation.

Conducted from Airbus Defence & Space’s San Pablo final assembly site in Seville, Spain, the 26 January flight marks the start of a campaign to assess the effect of multiple enhancements made to the twin-engined platform. 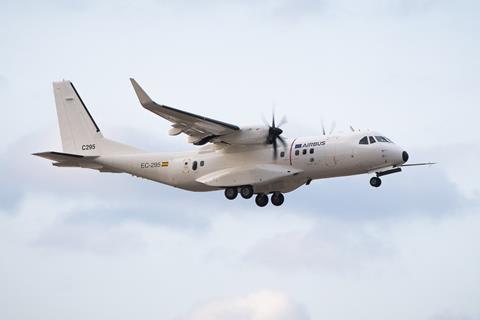 Adapted medium transport made its flight debut on 26 January

Modifications include what the airframer describes as a new, “high-efficiency semi-morphing wing” and “dynamic winglets”, plus the integration of a new flight-control system.

Airbus says the last of these “leverages digital control systems to optimise the aerodynamic shape of the wing in flight, while a new multifunctional flap has been completely redesigned and includes flap tabs in the trailing edge controlled by electro-mechanical actuators”. The ability to make minor in-flight control adjustments will “contribute to a more efficient high-lift system”, it adds.

A flat-panel satellite communications antenna also has been embedded within the upper fuselage to reduce aerodynamic drag.

“A one-shot assembly approach has been used for the new composite winglet and winglet tab, moving from the conventional ribs approach to a multi-spar integrated torsion box,” Airbus notes. Additionally, it says “jig-less methods have been used for the assembly of flaps and ailerons”.

“A few years ago this programme was just a dream of a more sustainable future for aviation. Today we are at the final stage and we finally made it fly,” says Francisco Javier Sanchez Segura, Airbus Defence & Space’s executive vice-president engineering. 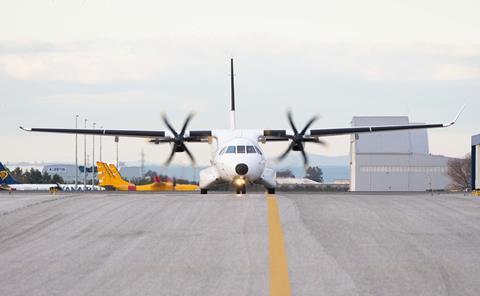 The adapted medium transport – registration EC-295, and named Flight Test Bed 2 – also will be used in support of the EU Horizon 2020 research and innovation programme, which is exploring technologies for a future class of regional passenger aircraft.

“The modifications include new materials and technologies designed to achieve noise, CO2 and NOx emissions reduction,” Airbus says. “With these technologies applied in a future regional multi-mission configuration, up to 43% CO2 and 70% NOx reductions can be achieved… as well as 45% less noise during take-off.”