One of two proposals to exempt Boeing’s 737 Max 7 and Max 10 from a year-end regulatory change could be included in a US defence spending bill lawmakers plan to finalise before year end.

Both proposals aim to free Boeing from needing to equip the types with a modern pilot-alerting system – an effort that would prove costly and could further delay the certification programmes.

According to a congressional aid familiar with the matter, the proposals have been submitted to Senate and House armed services committees for inclusion in the annual US National Defense Authorization Act – a defence spending bill Congress hopes to pass before year end. 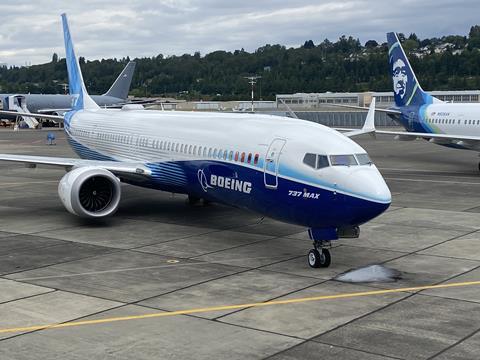 Which proposal – if any – might be included in the legislation remains unclear, as is whether Congress will pass the bill before year end.

Boeing declines to comment. The company aims to have its Max 7 certificated by early next year, followed by the Max 10 no later than early 2024. The House and Senate armed services committees did not respond to requests for comment.

Starting 27 December, under a 2020 law, the Federal Aviation Administration will be prohibited from certificating aircraft without a “flight crew alerting system”.

Boeing’s 737 Max lack that type of pilot alerting technology, instead having an older system dating to the first-generation 737. Updating the yet-certificated Max 7 and 10 with a modern alert system would be costly and likely further delay the certification programmes.

Of the two proposed exemptions, one would grant Boeing’s Max 7 and Max 10 a two-year extension from 27 December regulatory change, according to the person familiar with the matter. Senator Roger Wicker of Mississippi, the top Republican on the US Senate Committee on Commerce, Science & Transportation, had floated the idea earlier this year.

The other proposal, news of which broke in recent days, comes from Senator Maria Cantwell of Washington.

It would exempt from the regulatory change aircraft types for which manufacturers submitted certification applications before 27 December 2020 – when then-President Donald Trump signed the law.

The effect would be to free the Max 7 and 10 from the change indefinitely. Notably, however, Cantwell’s proposal would also require Boeing make two safety driven changes to all Max variants. It would need to install a means for pilots to shut off the stick shaker, and make improvements to the jets’ angle-of-attack (AoA) system.

The stick shaker indicates stalls but can become incredibly distracting to pilots. The AoA change is aimed at supplementing the Max’s two AoA indicators. Faulty indicators contributed to two Max crashes, in 2018 and 2019, that killed 346 people.

Boeing is already making those updates, as required by European regulators, to the Max 10.

But Cantwell’s proposal would also require Boeing, within one year of the Max 10’s certification, to produce all Max variants with the updates. And airlines, within another two years, would need to make the updates to all in-service 737 Max, says the person familiar with the proposal.

Boeing would bear financial responsibility for the updates, under Cantwell’s proposal.

The senator’s office views its proposal as providing some safety enhancement, and sees the competing proposal for a two-year extension as having “no strings attached”, the person says.

The exemptions, however, face pushback from at least one major union, and from families of the crash victims.

Allied Pilots Association, which represents pilots at American Airlines, thinks Boeing should be required to update the Max 7 and 10. American operates Max 8s but has no orders for Max 7s or Max 10s.

“While it is up to Congress to determine whether or not to grant the manufacturer an extension, we are confident in the safety of the aircraft based on having conducted extensive reviews of system safety enhancements and modifications, and risk assessments,” ALPA says.