Avianca to cut back fleet and close Peru division

Latin American carrier Avianca is to shut down its Peruvian division, and cut back the fleet of other carriers, as part of the reshaping of the company being undertaken following its filing for Chapter 11 bankruptcy protection.

Avianca Holdings sought protection on 10 May in a joint filing covering several of its airline divisions.

But it says it plans to “commence a wind-down” of its Avianca Peru division, as part of the “essential right-sizing efforts” to emerge as a more competitive company.

Closing the Peruvian operation will allow Avianca to “renew its focus on core markets” once the restructuring is complete.

Avianca Holdings’ bankruptcy protection filings state that a “significant number” of aircraft across its various airline fleets will be surplus to its requirements.

After the initial demand shock and a slow return to service, it says, air travel will stabilise at 20-30% below pre-crisis levels. 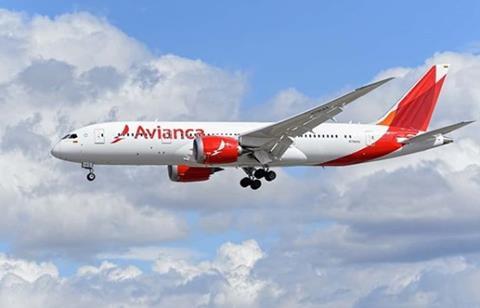 The company says it has started a comprehensive review of the fleet including suitability of individual aircraft to the Bogota hub which, while still under way, is likely to result in its returning excess aircraft to lessors and lenders.

Fourteen aircraft are listed as excess in its initial filing, including a Boeing 787-8 and two Airbus A330-300s operated by Avianca.

Avianca is seeking to reject leases, or abandon, the excess aircraft which, it says, will become “burdensome” as it proceeds with its re-organisation.