As the US air transport industry begins emerging from the pandemic-induced disruption, airlines are making difficult decisions about how to right-size for the current environment while maintaining their ability to quickly rebuild as demand returns.

Many have announced staff reductions across the board, including for pilots, who require a high level of initial and recurrent training in order to pursue those careers.

Industry observers expect the sector to contract by about 30% in the short term, and a bounce-back could take up to five years. This is leading to anxiety, frustration and resignation among professional pilots and those who had hoped to pursue a commercial aviation career.

The pilot shortage that the industry had long planned for is, for the moment, on hold. 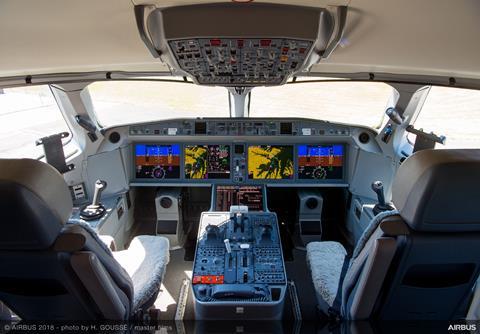 The cockpit of Airbus’ A220

“It’s no secret that this industry is not stable,” says Cameron Lampert, a 27-year-old certified flight instructor in California who wanted to make the jump to being a regional carrier pilot later this year. “Anyone who wants to get to the airlines now will probably need two to three times as long.”

But the coronavirus, after bringing global aviation to a near standstill, will not stop the thousands of anticipated pilot retirements in the coming years. A mandatory retirement age of 65 will thin the ranks, forcing airlines to walk a tightrope when it comes to furloughing, recruiting and replacing pilots.

They need to bring costs down significantly to match their now-smaller operations, but also must ensure they do not completely choke off the pipeline of candidates later.

Last year, United Airlines launched its “Aviate” pilot recruiting programme, conceived to train up to 10,000 new pilots in the next ten years. The airline says that plan is still on track, despite the downturn, as it attempts to replace the 400-800 pilots it expects to lose to attrition annually.

“We are taking advantage of this pause to not have to run so fast,“ says Curtis Brunjes, a 787 captain and United’s managing director of pilot strategy. “The demand is still there, it’s just depressed a bit in the short term because of the Covid crisis. The long-term value proposition for new people coming in remains unchanged. Aviation is still an attractive career.”

Since March, some airlines have cut back on bringing in pilot candidates, and working pilots in the lower third of airlines’ all-important seniority lists are preparing for a day later this year when they may have to find another job.

In April, US commercial carriers took US government financial assistance through the CARES Act, designed to help airlines maintain operations even as passenger demand fell to near zero. In return for the aid, airlines promised no furloughs or job cuts until the end of September. Many have already offered employees generous buyout schemes, early retirement options or long-term leaves in order to preserve liquidity and manage cash burn.

LONG ROAD TO THE COCKPIT

It usually takes about seven to eight years of training and a sizable financial investment to advance to a US commercial airline’s cockpit, says Elizabeth Tennyson, executive director of “You Can Fly”, an initiative launched by the Aircraft Owners and Pilots’ Association (AOPA) to make aviation more accessible to a wider swath of the population. The cost of this training varies, and could be as high as $100,000.

The path to becoming an airline pilot in the USA became more rigorous following a 2013 rule that in most cases requires commercial pilots have at least 1,500h of flight time before joining a passenger or cargo carrier, up from 250h.

“People who do this have to love it,” Tennyson says.

So commercial pilots who are nowhere near retirement age worry that the careers they spent so much time, money and effort to build may just disappear if, as expected, furloughs and layoffs kick in later this year.

“As major airlines look at ways to salvage or save their own pockets, the pilot group is the first on the cutting block,” says a pilot with a major US carrier who asked to remain anonymous due to the sensitivity of the topic. The ripple effect after September will have long-lasting detrimental effects on careers and livelihoods, even if the industry rebounds more quickly, the pilot adds.

Already today – more than three months before the government deadline – airlines are exploring loopholes that could allow them to cut costs while ensuring they do not violate stipulations in the CARES Act. Announced displacements, accelerated aircraft retirements and the folding of regional carriers Trans States Airlines and Compass Airlines are contributing to pilots’ general angst about the immediate future.

AOPA’s Tennyson says the situation can be compared to the downturn after the 11 September 2001 terrorist attacks almost 20 years ago. “At the time we saw a lot of people move on to other professions,” she says. “So it’s reasonable to expect that some pilots will return to another aviation career, like teaching, but others will go on to do different things.”

That uncertainty, however, does have a flip side that could benefit the next generation of aviators, Tennyson says.

“What we are hearing from flight schools is that within about a month of going back to work they have about as many students as they had prior to this,” she adds. With airlines delaying hiring many flight school instructors who were headed to the airlines, like Lampert in California, are now staying put.

“We all know the business is cyclical, but the scale of this thing is unprecedented,” Lampert says. “I plan to instruct for the rest of my life, and if I don’t get to the airlines, that’s okay too.”