Report by Gillian Jenner in London

The airport industry is ploughing around $3 billion a year into IT and telecommunications and most airports expect investment to be even higher next year, according to the latest research on airport IT trends.

The focus of airports' activities in the past year, and the major success, has been establishing managed network services for entire airport campuses - the foundation to offering a range of new technologies and services to airlines, tenants and passengers.

But with passenger traffic now back to pre-9/11 levels, the strategic priority is IT solutions to facilitate operations, with the focus on common-use kiosks and self-service options for passengers. And the greatest challenge in the next 12 months will be IT security, although most airports are still some years away from introducing biometric and radio frequency identification (RFID) tag solutions.

Results from the Airport IT Trends 2006 survey, commissioned for the third year by Airline Business in partnership with Airports Council International (ACI) and SITA, were presented at ACI's World Annual General Assembly in Cape Town, South Africa, in November. The number of airport and airport group respondents has increased to 73, representing the views of over 180 airports and accounting for over 50% of revenues from the top 100 airports in the Airline Business Airports Financial and Traffic Ranking and just over a third of the traffic. 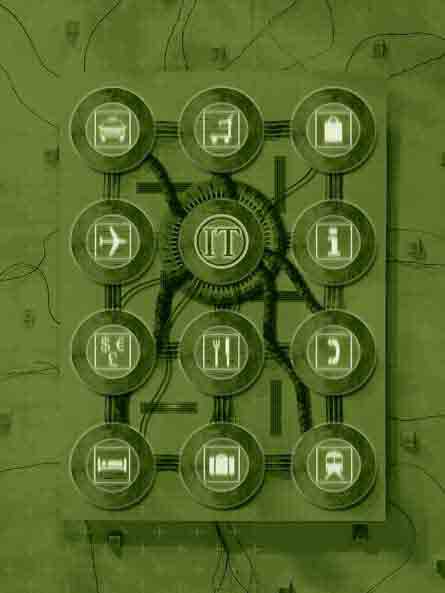 IT and telecommunications investment now accounts for 5.01% of overall airport revenues (up from 4.67% last year) on an unweighted basis. But on a revenue-weighted basis this investment dipped to 4.38% of revenues (from 4.64% last year) because the financial weighting is geared to the larger airports and those reporting more investment were mainly smaller. Nevertheless, apply these investment percentages to the airport revenues reported by ACI Airport Economic Survey 2005 and you are talking about between $2.8 billion and $3.2 billion earmarked annually for IT and telecommunications.

Despite budgets increasing for 75% of airports in 2006 and 66% expecting their IT budgets to be even more generous next year, the main obstacle to achieving IT strategy, cited by 36% of airports, is lack of investment/reduced budgets, with the second most important obstacle, for 21%, being lack of executive management support. This could result from many factors - caution if budgets had not been confirmed when the survey took place over-optimism about what is achievable or management wants to take things a bit slower than the IT department. But overall, support and investment for the majority is significant and ongoing. As ACI manager airports IT Thomas Romig points out: "Looking at the figures, there must be some buy-in and understanding that IT is essential to the growth of airports."

Nearly two-thirds of airports decide their IT strategy at local airport level rather than group level. Significantly, the number of airports without a formal IT strategy has dropped to just 8% from 18% last year, reflecting the critical importance of IT across the spectrum of airport operations and business processes. IT strategies themselves are, on average, just over four years - a slightly longer planning horizon than airlines, which average three and a half years according to the Airline IT Trends 2006 survey produced by Airline Business and SITA earlier this year.

"Airports have always produced 10-year build masterplans. It took a while for separate IT masterplans to catch on," says SITA vice-president airport services Catherine Mayer. "But now that it has, airports are preparing them as an IT roadmap, with a shorter duration, usually three to five years for actual projects, and planning ideas for the longer period because IT is changing much faster than roads and concrete."

Managed network services for the airport campus are a success story, with 51% already bringing them in. This is expected to rise to 92% by 2008. Not only is it simpler to provide one common network rather than multiple networks, it also offers cost savings to airports, and their airline and retailer tenants. "The communications infrastructure has become the lifeline of an airport and as such it is important for the owner to keep control of this valuable asset," says Mayer.

On the back of these networks, airports are offering a host of technologies. Voice over internet protocol (VoIP) - conversations via the internet - has been implemented by 30% of airports, with another 51% planning to do so in the next two years - and video over IP has been implemented by 25%, rising to 66% by 2008. Web services for passengers are provided by 70% of airports and although only 7% provide web check-in for common-use kiosks, this will rise to 59% within two years. Wireless local area networking (WiFi) for tenant or operational use has been implemented by 71%, with another 23% due on board in the next two years and 57% have implemented digital land mobile radio or trunk radio, rising to 83% by the end of 2008.

Technologies yet to arrive are mobile commerce for purchase at the airport and mobile passenger check-in, and WiMax - the next-generation WiFi, with the majority of airports currently having no plans for these services. Uptake of technology is clearly being driven by the operational needs of customers. Says ACI's Romig: "The new Boeing 787 will run updates when it arrives at an airport - its systems can be updated via the WiFi network. Some of the other technologies have not got that operational impact."

"New technologies are explored and utilised when they provide extra service, improve service or reduce cost," says Andy Owers, IT manager for Australia's Adelaide airport. "Theoretically WiFi and VoIP achieve this, although in some cases the new technologies can create other issues - for example, protection of data."

The current top IT investment priority, for 59%, is operational solutions to improve efficiency, followed by security-related solutions and baggage processing systems, for 57% and 49% respectively. A key area for operational efficiency is processing passengers, which is reflected in the trend towards common-use self-service (CUSS) kiosks: dedicated deployment now stands at 57%, with 5% planned in the next two years, but common-use deployment is now at 39%, and 47% have plans for deployment by 2008.

"Collaborative efforts between ACI, IATA and industry experts have resulted in an accelerated adoption of CUSS over dedicated-use kiosks. At the end of 2005 we had 12 airports with CUSS installations while today we have over 43 and expect to have close to 60 early in 2007," says SITA's Mayer. "Airports' primary objective is to increase passenger throughput while maintaining customer service. It is not cost-effective or possible in many cases to build additional check-in desks to accommodate the increase in passenger levels we are experiencing today."

Samuel Ingalls, assistant director of aviation, information systems at Las Vegas McCarran International airport, agrees. With passenger traffic growing there by more than 25% over the past three years, the investment focus is passenger processing systems and it is the first airport in the USA to be 100% common use. "Self-service is very important to us and our investment in the whole common-use self-service kiosk programme reflects that and has paid enormous returns already in terms of efficiency," says Ingalls.

The next stage is to extend the airport out to the customers via kiosks and check-in at hotels. McCarran now has its Airport SpeedCheck Advance service in partnership with Southwest Airlines in two of the city's hotels and the convention centre, with work under way to expand airline and hotel partnerships so that 10% of all passengers can take advantage.

Ingalls would like to see the self-service regime extended even further. "Here in the USA there is one important element I would like to see - the ability to self-tag bags. It's having common-use bag drop that will bring a lot of additional efficiencies," he says.

SITA's Mayer adds: "For an airport the next logical areas to expand self-service will be common baggage drop off locations, self-boarding at the departure gates and kiosks for mishandled baggage upon arrivals."

Will the drive towards passenger self-service be affected by the current slow take-up of new security technologies such as biometrics and RFID tags? No respondents in the survey offer biometric identification at check-in/boarding and the industry is on average almost three years away from providing it, with 61% having no plans and the majority no plans for introducing RFID on boarding passes.

Not so, asserts Mayer: "Self-service is not dependent on these technologies as there are other ways to verify a passenger's identity other than biometrics. Manual checks are still being done and they do not take away from the benefits derived from self-service, specifically reduction in processing time. However, the kiosks being deployed today are biometric-ready and the new e-passports also have RFID capabilities and the kiosks have been adapted to support this technology too."

The most popular applications for biometric identification and RFID are respectively employee access control and employee identification. Biometrics will be used for employee access control at 28% of airports by the end of 2006, with the industry average for introduction a little over two years, with only 25% having no plans for its introduction. RFID is used by 14% of airports for employee identification, with the rest of the industry about two and a half years away from using it, but 45% have no plans for introduction. This tallies with a recent ACI survey on biometrics that found most airports had put biometrics in place for access control to secure areas and going airside. The reason, explains, ACI's Romig, is that it is "the application where airports have the most influence".

Baggage is an obvious application for RFID, but only 9% of airports use it and the others are over three years away from introducing it, with 36% currently having no plans to use RFID for baggage. Half of McCarran's bag tags are embedded with RFID chips and Ingalls says that within a year he hopes to bring screening centres online, noting that RFID is more efficient and accurate than optical readers. "We can make the argument that there's a return on the investment when paying 21¢ a tag, but that price will fall and make the whole business case more palatable," he says, pointing out that a lot of airports are heavily invested in legacy systems.

Lack of global industry standards and processes, plus cost, are all factors behind the slow take-up of biometric identification and RFID technologies. "For RFID, although the chip prices are declining, it still requires substantial investment, so airports and airlines are evaluating the return on investment," says Mayer. "For biometrics, airports and airlines are working with governments and authorities to understand if these will be covered by other funding sources."

Security is inevitably a major concern for airports - IT security audits have been conducted by 57% in the past 12 months, with another 32% planning to do so in the next year - and was the issue most cited by airports as their greatest challenge in the year ahead.

The worries of airports echo those of any business with an IT network - maintaining its integrity and security. There are also security issues around passenger, baggage and cargo screening and meeting the demand of changing security regulations, says Mayer. She believes IT will be increasingly used to facilitate security. "Access control, perimeter surveillance, threat and motion detection are all top priorities too. We need a comprehensive solution that addresses them all." The 2007 survey will help us discover how airports rise to this challenge.