Any air arm able to field 30 operational MiG-21s, 11 Douglas A-4K Skyhawks and which ordered up to 28 light combat jets would be placed well up the rankings in Flight International’s annual World Air Forces directory.

It may come as a surprise, therefore, to learn that the aircraft listed above belong to a commercial company. Welcome to Draken International, the world’s largest private air force.

Lakeland, Florida-based Draken formed in 2011, and has grown rapidly since then. Currently the company undertakes a range of training activities for the US military, but is also actively looking at opening a European base.

“Our business model was to be the first commercial air service provider to utilise fourth-generation tactical fighter aircraft,” says chief executive Jared Isaacman. “We felt that was a big differentiator between us and other companies in what is a very small industry.”

The company initially achieved that fourth-generation label in the shape of the Skyhawks, which Draken bought from the Royal New Zealand Air Force in 2012 after that air arm decided to retire its fast jet component in 2001.

“They’re unlike any other Skyhawks in the world,” explains Isaacman. “They had a $300 million upgrade in the 1990s, where they basically took the guts out of the [Lockheed Martin] F-16 and put them into the Skyhawks.” This included a Westinghouse AN/APG-66 radar, hands-on throttle and stick (HOTAS) controls, a glass cockpit and a MIL-STD-1553B databus.

The aircraft were in storage in New Zealand for almost a decade, but had been very well preserved, Isaacman adds.

As well as the Skyhawks and MiG-21s, which were purchased from Poland, the fleet includes nine Alenia Aermacchi MB-339s – also courtesy of New Zealand – plus five Aero Vodochody L-39 Albatros bought from various US private owners. In their off-duty moments Isaacman and some of his colleagues fly these as the Black Diamonds aerobatic formation team.

Competitors, he argues, tend to operate older equipment such as Israel Aircraft Industries Kfirs, Hawker Hunters or Learjets for roles such as target-towing or electronic attack profiles.

Draken’s aim of differentiating itself was further highlighted at July’s Farnborough International air show, Isaacman says, when the firm placed an order for up to 28 Aero Vodochody L-159 Advanced Light Combat Aircraft (ALCA). 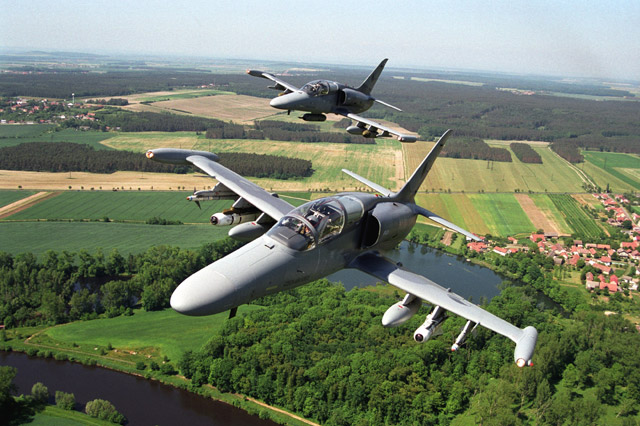 The single-seat ALCAs – derived from Aero’s 1970s-vintage L-39 Albatros – have been surplus to requirements since 72 were built were built in the early years of this century, and have been stored awaiting a purchaser.

The aircraft, Isaacman says, exactly fit a niche in the company’s fleet. Having been built from 2001-2003, “that means [the type is] very supportable and sustainable”.

“They have no flight time on them and are packed with fourth-generation radar capabilities, as part of a suite designed by Selex,” he adds.

The aircraft have a Grifo-L multimode pulse Doppler radar and a glass cockpit, plus HOTAS controls.

“The big bonus for us is they’re hyper-efficient. They have a modern [Honeywell] F124 engine and use almost no gas,” he says.

Draken is spending additional money on the ALCAs to upgrade their performance. The improvements will include aerodynamic refinements to increase top speed, although Isaacman declined to provide details, citing proprietary information.

Also, manoeuvring flaps already used on the two-seat version of the aircraft – but which have not previously been fitted to the single-seaters – will be added. These will be designed by Aero.

Draken will take “up to 28” examples. This formula was originally agreed with the Czech airframer, but the Iraqi government then weighed in with what Isaacman describes as “a pretty strong bid” for 12-15 of the aircraft held in storage.

If that order comes to fruition, Draken is still guaranteed a minimum of 14 aircraft. At present, however, the Iraqi bid seemed not to be progressing, he says.

In cost terms, the deal is small change for an air force, but “a very large and expensive purchase for us”. Draken plans to have the first examples operational by late 2014 or early 2015.

Missions flown for the US armed forces run the gamut of training roles – from simple tasks such as gunnery banner towing to flying cruise missile flight profiles against US Navy vessels.

The main driver behind the use of Draken’s aircraft in these roles is, of course, cost.

Finally, there is the danger of “negative training”. With many Western fighter pilots only getting around 150 hours of flight time per year, it makes no sense to use up some of that valuable time flying missions such as cruise missile profiles that will never be of use to them in conflict.

While all Draken’s work is currently undertaken for the US military, it is actively looking at opening a European base. “We’re in a number of conversations because of the growing demand,” Isaacman says. “The French navy, for example, uses L-39s and Hunters to provide threat simulation. The L-39 is a great trainer aircraft, but it has no equipment to create new-generation threats.”

Finding a suitable European location “is obviously a big decision for us”, and will depend on several factors including security and costs.

Draken does not handle the high-end missions undertaken by US Aggressor units, however. “The Aggressors that fly [Boeing] F-15s, F-18s [and F-16s] can simulate just about every threat in the world,” he says. “However, there are a wide variety of threats from third-generation or early fourth-generation aircraft that it might be too costly to use Aggressor aircraft to simulate.

“You would look to have the Aggressors focus on simulating MiG-29s and [Shenyang] J-11s. We can easily simulate MiG-21s and other third/fourth-generation types.”

The company draws its pilots from ex-military ranks. “We have a lot of ex-USN and USMC pilots who used to fly A-4s and F-16. Pilots seem to adapt to the A-4 very easily,” Isaacman says.

The MB-339s, meanwhile, “are just a joy to fly”, he adds. “An original group of us was trained to fly by an Italian 339 pilot. It’s well-designed and easy to adapt to.”

As all the MB-339s are two-seaters, it is a relatively simple process to train new pilots on the type. 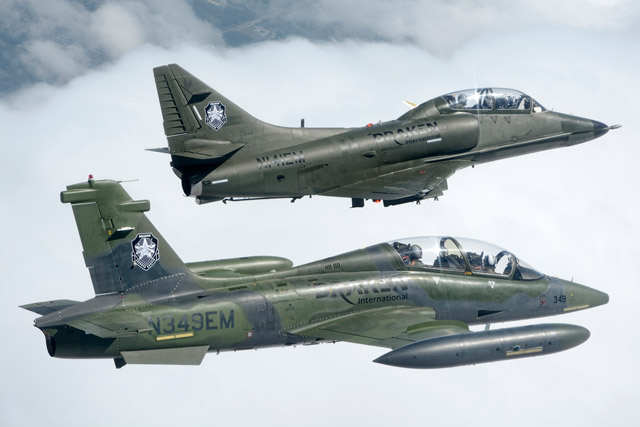 It was less easy finding pilots for the MiG-21s. “There’s no expertise in the USA on that aircraft whatsoever, but we’ve been on very good terms speaking with [MRO provider] Aerostar in Romania, who have been able to provide a lot of guidance,” he says.

For fighter pilots retiring from military service after 15-20 years, being able to continue to fly fighter aircraft is “a dream scenario”, Isaacman adds.

Despite the increasing sophistication of simulators, at some point pilots have to experience real aircraft coming after them.

“Simulators are great – and the more that fidelity increases, the more valuable they will be. But as a pilot myself, seeing another aircraft coming at you creates a much higher tempo than just sitting at a computer,” Isaacman says.