Two years ago, the long-term prospects for the privately-owned Marshall Aerospace and Defence Group (MADG) looked decidedly fragile. Decades of in-service support provided to the Royal Air Force’s Lockheed Martin C-130Ks and TriStars had recently come to an end – and worse was on the horizon, with the service’s new-generation C-130Js facing premature retirement in 2022.

For a company which has as its centrepiece the maintenance, repair, overhaul and upgrade of the Hercules, the latter decision – contained within a Strategic Defence and Security Review (SDSR) of late 2010 – was nothing short of a disaster. But the decision was short-lived, with the Ministry of Defence late last year announcing that a reduced fleet of 14 short-fuselage C-130Js will be retained, and upgraded for use until 2035.

The reversal transformed the outlook for Cambridge airport-based MADG, at a time when it is also working to broaden its aerospace activities in other sectors, under a strategic plan formed in 2011.

Marshall and Lockheed will on 9 July celebrate a remarkable 50-year relationship on the Hercules, which began as the RAF’s new tactical transport fleet entered use in 1966. A specially-liveried C-130J will form the backdrop for a cake-cutting ceremony during the Royal International Air Tattoo at RAF Fairford in Gloucestershire, with the air chiefs of up to nine nations that operate the type in attendance.

“The RAF is provided with the highest level of operational fleet availability [for the C-130] in the world, driven by the full spectrum support we provide, in partnership with Lockheed Martin and Rolls-Royce, under the Hercules Integrated Operational Support [HIOS] programme,” the Marshall Group notes in its annual results report for 2015. This availability-based arrangement was last year extended until 2022, in a deal valued at £369 million ($482 million).

Under the HIOS model, an average of 15 – but sometimes up to 18 or 19 – C-130Js are made available to the RAF each day from its current 24-strong fleet. “We have increased availability by 30%, and reduced the cost of ownership by 20%,” says MADG chief executive Steve Fitz-Gerald, who adds: “we set out a long way ahead of SDSR [2015] to ensure that this would be the most available and capable platform.” 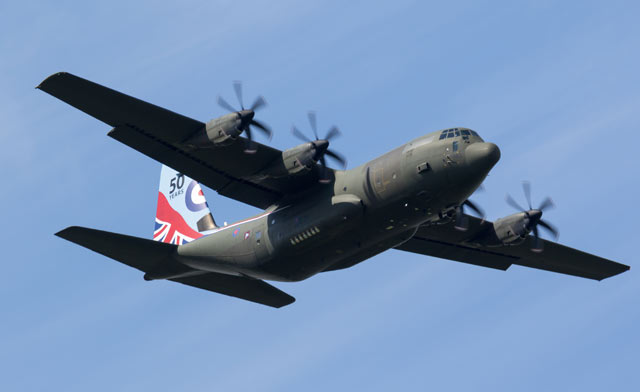 Cambridge-based Marshall has supported the UK's tactical transports since 1966

Marshall will be pivotal in modifying the fleet to a Block 7 operating standard, enabling it to meet future communications, navigation, surveillance and air traffic management systems requirements. They will also be gaining an updated defensive aids system, beyond-line-of-sight communications equipment and other capabilities akin to those found on its last K-model examples.

And after years of punishing service in Afghanistan, the aircraft are also to have their centre wing boxes replaced, starting from around 2019 or 2020: an activity that could enable the type to fly on until 2050. Fitz-Gerald notes that this work will be performed during a scheduled period of major maintenance, to minimise the time that each aircraft is unavailable. “In smaller fleets, to get the availability up then modifications and upgrades need to be embedded within the maintenance period,” he says.

It is in this area that MADG believes its capabilities are in a different class to other support organisations. “Design, certification and airworthiness is an absolute core competency at the heart of what we do,” says Fitz-Gerald, adding: “Lockheed treats us as a true design partner.”

Another near-term opportunity lies with the French air force, which is poised to announce a contractor to upgrade its C-130Hs for continued use until 2040: MADG is teamed with Thales.

Marshall also typically supports between 60 and 100 Hercules operated by around 10 air forces, including Austria, Denmark, the Netherlands, Norway, Oman, Qatar – for which it completed a satellite communications installation last year – and Sweden.

“We continue to look into Europe and the Middle East for other customers, where we can work with them to provide the same services,” says Charles Hughes, vice-president business development and strategy. Other opportunities could arise from a four-unit C-130J acquisition by France, German interest in the same platform, and from Lockheed’s commercial variant LM-100J.

Meanwhile, the company’s modification skills are being called on under a contract with Aerodata to adapt a pair of ATR 72-500s into maritime surveillance aircraft for an undisclosed navy. Service entry for these aircraft is expected in 2018 and 2019. The company is performing a complex adaptation of two Bombardier Global 6000 business jets under a Project Dolphin activity for another customer. MADG is responsible for making major structural changes to accommodate an intelligence-gathering sensor payload, and tasked with all aerodynamic, power and cooling adaptations.

“We are an OEM without a product – we have all the design approvals,” Hughes notes.

A first flight is due late this year, with the company to prepare the aircraft for supplemental type certification on the civil register. It has not been disclosed which nation is the customer, but the United Arab Emirates is separately acquiring two Global 6000s from Saab for airborne early warning, maritime and ground surveillance duties.

With additional interests in motor retail, leasing and fleet solutions, plus property, the Marshall Group in 2015 recorded combined sales of £1.58 billion. It ranked 87th in FlightGlobal’s ranking of the Top 100 aerospace companies from 2014. Some 20% – £312 million – of this business was secured by its aerospace and defence group.

Among its other activities, the company manufactures additional fuel tanks for the P-8 – it has recently supplied its 400th unit – and makes complex composite parts, such as for the Eurofighter Typhoon’s BAE Systems Striker helmet. Its personnel also provide line maintenance for cargo operators Atlas Air at RAF Brize Norton and AirCargoLogic and Cargolux at Stansted airport.

A key part of the firm’s strategy for the past five years has been rebalancing its business, by “securing a sustainable and profitable position” for civil aerospace activities: a sector that it has re-entered after a more than 15-year absence.

Base approvals have been secured to work on a wide variety of commercial aircraft at its Cambridge site, contributing to a workload balance of roughly 70:30 in favour of military aircraft. At one point, that figure was nearer 90%.

Work has included replacing landing gears and performing corrosion recovery on Airbus A320s for EasyJet, completing an in-flight entertainment system installation for TAP, and supporting A330s for Air Europe and Wow. Boeing types that can be accommodated include the 737-400 and -800, 747-400 and 767, and it is applying to add the 757 and 787.

“People know that if they’ve got a difficult issue, if they put the aircraft in to us, we can do everything, including manufacturing [parts] to Airbus and Boeing process specification,” Fitz-Gerald says.

MADG is also involved in a modernisation study conducted for AirCargoLogic with regard to the Antonov An-124. If advanced, this could see the aircraft receive replacement engines from Rolls-Royce and new avionics and cockpit equipment integrated by Marshall and certificated to European Aviation Safety Agency standards. This would enable the Ukrainian-designed type to meet noise and airspace integration requirements post-2020.

In another example of its diversification, Marshall is the Northern Europe and Benelux distributor for Honda Aircraft’s HondaJet. Having taken delivery of its first unit during the EBACE show in Geneva, the business jet – registered M-HNDA – will be in the static display at the Farnborough air show.

“We’ve got a number of solid leads,” says Hughes, after the company staged demonstration flights for potential customers on 30 June. “We should know by the end of Farnborough whether those single-digit firm leads are maturing into a deposit.” HondaJet buyers will be supported from a fixed-based operation in Birmingham, where a customer acceptance facility has already been established.

Additionally, the company has become an authorised service centre for Nextant’s 400XT/XTi, and Hughes says it is finalising a pact to become a representative for the company. Marshall also purchased the former Hawker Beechcraft site in Chester, where it now conducts line and depth maintenance on Cessna Citation business jets.

Business and general aviation, along with charters, continue to be supported in Cambridge, where a £22 million resurfacing project will ensure a runway life of 25-30 years. However, the company has stepped back from a past ambition for it to grow as a regional airport, in favour of advancing property development around the site.

The Marshall Group is also to welcome a new chairman in September, with Alex Dorrian joining from Thales UK as the first non-Marshall family member to take the helm in the company’s 107-year history.

While he concedes that “five years ago we were a long way short of the benchmark, for example on the long-range [P-8 fuel] tanks with Boeing,” he notes: “now we are seen as an exemplar, and we’ve done exactly the same with the RAF and a number of our European partners."

“We’re independent, and we’re sovereign,” he adds, pointing out that 80-90% of the company’s profit is reinvested into it. MADG has spent about £55 million on capital expenditure and facilities over the past five years, versus around £10 million on acquisitions.

“We’ve got some pretty ambitious plans to continue to grow, with the outcome of the SDSR,” he says. “Our aim is to become the premier aircraft sustainment organisation in the UK. That’s whole support, with design, engineering and certification – it’s not MRO.”