With an ongoing push to expand and improve the efficiency of its fast-jet pilot training, the Royal Australian Air Force (RAAF) has implemented three new flight mission simulator (FMS) stations at its training campuses at Williamtown in New South Wales and Pearce in Western Australia.

“Our training [regime] has to increase in output, as well as efficiency – especially with the new [aircraft] equipment and upgrades the RAAF is using,” explains Grp Capt Chris Hake, the commanding officer of 78 Wing at Williamtown. “And it has to dovetail in with our other [training] courses such as those for the [Boeing F/A-18] Hornet and [Lockheed Martin] F-35. The time we take to train our pilots is very important, in terms of both operations and culture.”

To meet these challenges, the air force is in the final stages of deploying its new lead-in fighter training system (LIFTS). By giving them jet platform experience, this underpins the next step for pilots who have graduated basic training, to prepare them for operational training on frontline aircraft.

The new system is designed to provide pilots with the best possible launchpad for their deployment in its squadrons that operate the F/A-18F Super Hornet, the EA-18G Growler and upcoming F-35A. 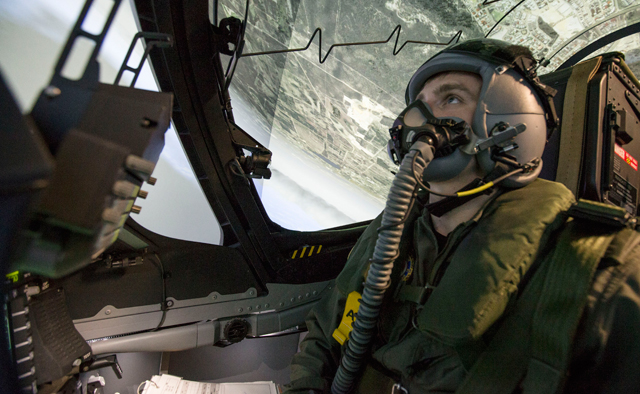 With two FMS at Williamtown and one at Pearce scheduled for full readiness by the end of 2017, the project ran right on time. Operational training began at Pearce’s 79 Sqn in July 2017, and at Williamtown’s 76 Sqn in January 2018.

CAE training solutions manager Phil Randerson says the installations are “running in lockstep” with the RAAF’s broader lead-in fighter capability assurance programme framework. “This is one of CAE’s newest [training] programmes and we are very excited about it,” he says.

The simulators, instructors and support staff together make up a training deal worth some $14.5 million, spread over four and a half years.

In the lead-up to the FMS part of the training, student pilots will undergo training on Pilatus PC-9s and PC-21s, where they learn core piloting skills and prop-driven familiarisation. The training emphasis then shifts to jet aircraft, based on the RAAF’s fast jet trainer, the Hawk 127.

According to Wg Cdr Neville O’Donnell, commanding officer of training squadron 76, this new RAAF emphasis on FMS training underlines its commitment to train and supply “a quality feed of fast-jet pilots over upcoming years”.

The simulators will also be linked to the CAE-developed Open Geospatial Consortium Common Database (OGC CDB) architecture that allows information exchange with other Australian Defence Force simulators. The use of OGC CDB also enables rapid data updates, correlation and distribution on flight and airspace data according to local conditions and changes, and supporting new training and mission rehearsals.

The installations are staffed by CAE trainers and technicians as part of the ongoing contract, in addition to the existing roster of RAAF flight instructors.

The FMS environment also features electrically actuated g-seat motion and pressure simulation, along with air supply and plug-in g-suit functionality. For night mission training, night-vision goggle inputs give as close a simulation of a real cockpit as possible. “The FMS allow trainees to operate in full mission mode – not just hands and feet,” says Randerson. “They offer an experience virtually indistinguishable from the real aircraft. And the [trainee] pilots really enjoy using them,” he adds.

The air force says the new simulators, with their state-of-the-art visual technology, will reduce the reliance on airborne training time and requirements and provide expanded training capacity for the Hawk trainee pilots.

Hake notes that as well as improving time utilisation, the new FMS installations allow a much more flexible schedule to be adopted. This, he says, is due primarily to the removal of restrictions on live aircraft use because of bad weather, staff availability, other squadron operations and so on.

“Using the simulator gives increased training availability, improves the quality of the graduates and also allows us to remediate issues that trainees may have before they become too established,” he adds. In addition, Williamtown’s two FMS devices can operate together in link mode, notes Randerson. “This allows the trainees to operate at much higher levels, and to develop better operational awareness.”

One standout feature of the FMS is its ability to replay flight sortie sections to cover the exact inputs during the simulated flight, says 76 Sqn flight instructor Flt Lt Adam Grinyer. This ability is a significant advantage over traditional methods, which previously used post-flight debrief tracks chalked up on a white board, along with model aircraft on sticks (aircraft batts) used to give three dimensional and spatial reconstructions.

“Using the whiteboard and batts takes a long time, and lots of skill to make lesson issues clear to the pilots,” says Grinyer. “Using the FMS playback gives a recap that is 100% correct in all respects; it is totally data driven and not at all subjective. There is no ‘that’s what I saw’ confusion from either the instructor or the trainee,” he adds.

The flying instructors also cite the FMS’s capability to add other aircraft into a mission scenario. This enables previously unachievable 2D analyses of both one-on-one or two-against-one dogfight simulations, in real time. “Plus you can pull back the viewpoint and look at things like turning circle, radius, relative position and [closing] speeds between up to three aircraft – again all totally accurately,” says Grinyer.

The FMS’s ability to add other aircraft into the visual mix the trainee pilot is “flying” in, or even to “fly” with aircraft from remote devices, allows for the best possible use of the facility, notes Randerson: “Issues of latency [lag between sites] have almost gone away today. It’s now just about bandwidth.”

This ability to not just fly simulated sorties, but to analyse conditions and events across a range of flying, makes FMS equipment perfect for broad-based training, even across a range of aerial defence users, asserts CAE. “There is an increasing emphasis on operational cost and efficiency in defence today – it’s all about brain training and being mission ready,” says Ian Bell, vice-president Middle East and Asia-Pacific defence and security at CAE.

Bell says although students are eager and keen, trainers need to tap directly into that, and make sure updates are as current as possible. He argues that the use of the latest FMS technology plays to those demands most effectively – and it seems the air force agrees. 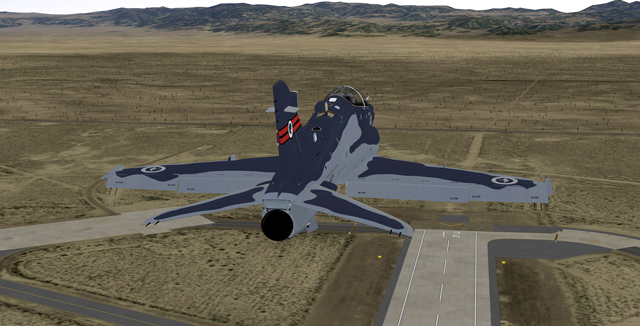 “At 76 squadron, we can see that the technology and the demands of aircrew are always increasing; we have to have maximum commitment all of the time,” says Hake. He goes on to note that one of the most critical issues in the increasingly complex training and operational environments in today’s fast-jet squadrons is the need for what he calls “cognitive headroom”.

“What we do here is not about teaching, it’s about learning,” he says. “All of the pilots need to be exceptional, but we have to [find ways] to increase their cognitive space, the room to learn new things. Over-aroused students can’t learn.”

Hake says using the FMS gives students the room to understand and practise the basic skills needed to fly the plane in a high-pressure environment. It allows them to build a kind of muscle memory, one that releases cognitive space to learn new and demanding skills, all while flying an aircraft at 500kt (926km/h).

“It allows us to take [trainees] forward in little steps, building blocks. Not just [dump them] into a complex, swirling airspace situation,” he says. “All this helps them build knowledge, skills and attitude.”

O’Donnell notes that the other advantage of using FMS technology is the ability to make better use of aircraft time. “We need to maximise every minute of live flying,” he says. “So we need to look at how we can make brain space for the students to learn. That can be done [best] in the simulator.”

Additionally, the physical strength and fatigue issues when flying a real sortie pulling up to 9g are not exactly conducive to a good learning experience, notes O’Donnell.

“The ability to play back what we call a ‘golden run’ by an instructor, where the student can experience the real situation, and can pause to examine and relook at the situation, is a huge benefit,” he adds. “I can’t emphasise how important that is. It allows familiarity with what we want them to look for.”

CAE admits that the selection of instructors – both CAE staff and RAAF personnel – is critically important to maximising the efficiency of Australia’s FMS equipment. Randerson says finding suitable instructors with the requisite experience – but who don’t want to carry on flying – is not easy.

“We focus on [finding] locally sourced instructors,” he says. “Some are instructors who still love flying, but find full-time [flying] can take a physical toll on the body.” Working with the FMS team, he says, allows them to keep their links with the world of aviation and to pass on their skills, but without the muscular demands brought on by sitting in the cockpit of a fast jet.

“The use of ex-RAAF local instructors also allows us to preserve the squadron culture that is so vital to the training,” he notes. “This allows the CAE [team] to be part of the squadron. The students are pleased they are not just working with a contractor when they are in the FMS,” he says.

The installation of the Hawk 127 FMS systems at Pearce and Williamtown also gives the RAAF a path towards ongoing training development. CAE is working on the potential to implement distributed training and live-virtual-constructive training in conjunction with other simulators and aircraft. The possibility of joint terminal attack controller training for close air support and forward air operations is just one possibility.

With increased familiarity, it is likely that the proportion of FMS time could be increased to up to 45% of training, from its current 30%, says Hake. “This flight simulator [approach] is the future [for training],” he says.

With a current mix of some 25h in the FMS and 60h in the aircraft, Hake says trainees can be brought to a better state of training without having to go through repeated post-flight debriefings. As he puts it, it is “very difficult to stop and assess a pilot in the air”, but quite possible in a simulator.

But probably the most important aspect of the new FMS implementation is that it saves time and money – as well as improving quality, says Hake.

He says live Hawk air training demands high-g manoeuvres, which means it is “sweaty, uncomfortable work”. Using the FMS, trainees can now understand fighting and working with and against the weather, all without requiring expensive airtime – or sweating so much they find it hard to learn.

“The use of the simulators has definitely increased our [pilot trainee] pass rate. Here at squadron 76, we now have the ability to find and remediate errors early. That makes a huge difference. Now, failures are a very small number,” says Hake.

“Our business here is generating fighter pilots. We would be fools not to use flight simulators,” he adds. “Quality pays for itself.”