Single-model product offerings are so rare in the commercial aircraft business that they usually represent a strategic miscalculation made somewhere at the beginning of an unexpectedly long development process.

Launched 15 years ago as a replacement for the Tupolev Tu-134 and Yakovlev Yak-42, the original Superjet concept included a family of three products – a 60-seater, a 75-seater and a 95-seater.

As the development schedule dragged on, it became clear the 60-seat concept so popular in the late-1990s regional jet boom had fallen out of favour. By the time Sukhoi finally delivered the first operational product – and largest of the three original variants – in 2011, interest in completing development of the 75-seater had also dried up. 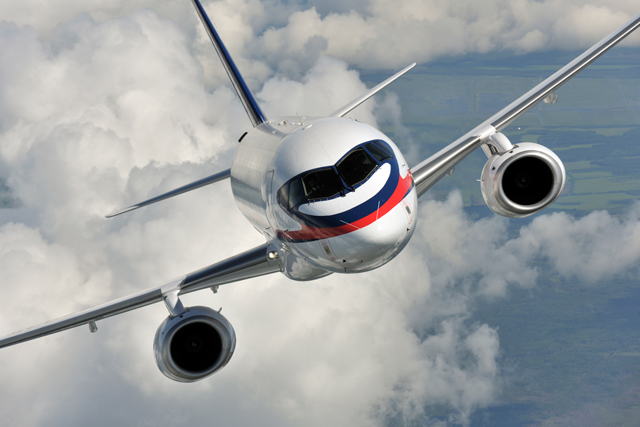 The Superjet family of aircraft is now back on the agenda, but the focus has shifted from smaller aircraft to a larger model. The Superjet SV also offers Sukhoi and the greater Russian industry a unique opportunity to improve aircraft performance.

The stretch project is currently in the preliminary research phase, Sukhoi deputy chief designer Alexander Dolotovsky tells Flightglobal in an interview. He describes the status in mid-June as between gates 2 and 3 of Sukhoi’s internal development process.

Sukhoi claimed a 6% cash operating cost advantage for the Superjet over the original E-Jet series. It would have to do something with the Superjet to respond to the improved performance of the E-Jet E2 series.

But Sukhoi also faced several constraints. Embraer has received orders for more than 1,000 E-Jets, creating a strong financial base to develop the improved version. Sukhoi has struggled to attract non-Russian buyers for the Superjet, with certain exceptions, such as Mexico’s Interjet. But the Sukhoi programme lacks the financial power offered by the E-Jet series. The Superjet programme also fell deeply into debt, which was relieved earlier this year with a commitment from the Kremlin to invest in a nearly $2 billion bail-out.

While the design for the stretched, so-called Superjet SV does not start with a clean sheet of paper, Sukhoi is working on a package of major performance improvements that could alter the shape and lifting characteristics of the wing, exchange Western-based suppliers of systems and avionics with Russian firms but possibly leave the powerplant largely the same (albeit slightly more efficient).

But the Superjet programme’s association with the same designers responsible for high-performance fighters such as the Su-27 Flanker clearly had an effect.

The Superjet on paper boasts one of the most efficient wings for any commercial aircraft. By one standard measure of efficiency, the Superjet wing’s aspect ratio is a highly respectable 10, equalled or exceeded only by aircraft such as the Bombardier CSeries and Boeing 787.

“We already know quite well the Bombardier product. We are looking at the new generation Embraer product. But I believe it will be quite close to the aspect ratio level already achieved. So it is between 10 and 11. I do not think Embraer will take the risk to increase the aspect ratio to more than 12,” Dolotovsky says.

“You know there is a big research activity in the aviation industry now to find a solution to buffeting to increase the efficiency of the wing,” Dolotovsky says. “And there is a goal after 2020 just to find a preliminary technical solution which could be recommended in industry to be used for advanced project after 2020. So in this direction no way to increase lift over drag ratio for my point of view for close to 20 years.”

For the stretched model, Sukhoi is considering ways to slightly improve the performance of the wing, but such a task is complicated. Making the wing more efficient has the effect of increasing the aerodynamic loads, which, in turn, requires the designers to increase structural strength from the wingtip to the torsion box where the wing meets the fuselage.

“We have good experience with the torsion box we designed for that aircraft, so we have found an ability to increase a bit the aspect ratio,” Dolotovsky says. “So we expect to increase lift-to-drag ratio level several percent more than in comparison with the current aircraft.”

“We will see. But we have preliminary result in the high-speed wind tunnel at [the Central aerohydrodynamic research institute – TsAGI], and it’s promising,” Dolotovsky says.

The standard formula for calculating the distance an aircraft can fly – popularly known as the Breguet range equation – establishes range as a function of wing area and thrust for a given weight. As the weight of a stretched model increases over the original, the designer must either improve wing efficiency, thrust or some combination of both.

For the stretched Superjet, Sukhoi is aiming to emphasize wing area over dramatic changes in the thrust requirement.

The current Superjet is powered by the SAM-146, a product of a collaboration between France’s Snecma and Russia’s United Engine Corp.

“If you compare our engine with the existing product on the market, which is the CF34, in terms of specific fuel consumption the SAM-146 is better by 1-2%, which is a lot,” Dolotovsky says. “This engine is based on the technologies and the philosophy – from my point of view philosophy is much more important in terms of design because technologies change but philosophy is a way of thinking – it is very reliable, very maintainable. It is friendly to the ground staff. And it is very robust to the heat injections.”

In considering options for powering the stretched Superjet, Sukhoi has closely studied the Pratt & Whitney geared turbofan engine, which is selected to power the Airbus A320neo, Bombardier CSeries, Embraer E-Jet E2 and the Mitsubishi Regional Jet. Russian industry also has deep insight into the engine’s capabilities through P&W’s selection by Irkut to power the MC-21.

“It’s really big challenge from P&W product. We respect these engine people. To increase bypass ratio by using gear box, by creation of the new more efficient core. It’s a really interesting product and we look at that product,” Dolotovsky says.

Sukhoi’s analysis has concluded that the geared turbofan engine’s fuel efficiency advantages are real, but they come for a price. By retaining the SAM-146 powerplant, Sukhoi hopes to offset the fuel efficiency improvement offered by the P&W product with a steep price discount on acquisition cost.

“I’m not sure that Pratt & Whitney engine will cost exactly the same as SAM-146 for instance,” Dolotovsky says. “And I’m not talking about maintenance. I’m just talking about itself cost. So then you will compare. I have got aircraft number one and aircraft number two. The [P&W-powered] aircraft is 10% more efficient –yes, it’s more fuel efficient. But if you take the full economic analysis, at least [the SAM-146-powered aircraft] will become comparable. At least.” 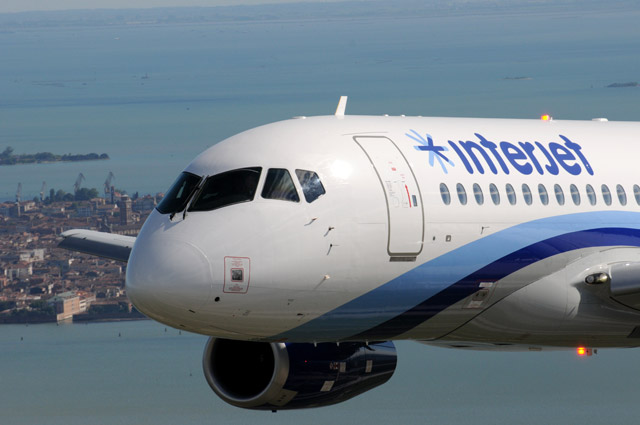 The improved wing surface of the stretched model also plays a critical role in Sukhoi’s analysis of the thrust requirement. By using the more efficient wing, the heavier stretched Superjet should be able to meet take-off and range requirements with only a small improvement in thrust compared to the original version of the aircraft.

“We found a technical solution to keep the same engine. We have the same thrust rating,” Dolotovsky says.

In addition to the E-Jet E2 model, Sukhoi’s stretched model will compete in the same cabin segment as the Bombardier CSeries family, including the 110-seat CS100 and 135-seat CS300. The CSeries and the Superjet share obvious similarities, with five-abreast, economy-class cabins.

The CSeries is a formidable rival for Superjet. “It’s a nice aircraft, I like it,” Dolotovsky says. “It looks like a Superjet.”

But Sukhoi is careful to promise too much for the stretched Superjet. The CSeries, for example, is offered with more than 3,000nm range, a trans-continental distance rivaling the Airbus and Boeing narrowbody families. Sukhoi, however, plans to limit the range of its proposed commercial product to less than 2,000nm.

The stretched aircraft will be “suitable for regional operation with optimised costs”, Dolotovsky says. We would not like to make a universal aircraft. History shows if you’re trying to be the best everywhere, you will never be good anywhere. We are focusing on the regional market. We would not like to have Airbus and Boeing as competitors. We are very respectful of those guys.”

Another part of the planning phase for the Superjet NG is the study of future avionics requirements. If the Superjet SV enters service after 2020, it will be subject to several new requirements for airspace access imposed by the USA’s NextGen and Europe’s SESAR air traffic modernization programmes.

“So we expect to use this opportunity to give the same cockpit for both family members, but with some advantages,” Dolotovsky says. “We’ll keep our five-screen system because it looks nice, and it is positively accepted by the pilot. We will keep the general shape of the cockpit and the general functionality, for sure. We also keep the fly-by-wire system because it is outstanding now. But maybe we will grow some capability for the avionics suite in accordance with the requirements.”

A head-up display is expected to be mandated for all commercial aircraft operating in China by 2025. The Chinese have recently become a major Superjet customer, with a China-based lessor committing to acquire 100 aircraft.

“We will consider a HUD for the Superjet 100, especially for the Chinese market,” Dolotovsky says.

In the last line, the word "Chinese" has been inserted in place of "trainer" to correct a transcription error. The article also has updated the nomenclature for the stretched model, which is called the Superjet SV.