ANALYSIS: HAV secures letters of intent for Airlander 10

Hybrid Air Vehicles has secured its first two letters of intent for its Airlander 10 hybrid airship, as it works to secure a launch order and start a certification campaign.

The commitments, from “commercial” operators, with others “in train”, come as the UK business steps up its efforts to market the world’s largest aircraft to the high-end leisure market. HAV installed a luxury cabin mock-up at its Bedford premises earlier this year, and has been exhibiting it to potential customers. 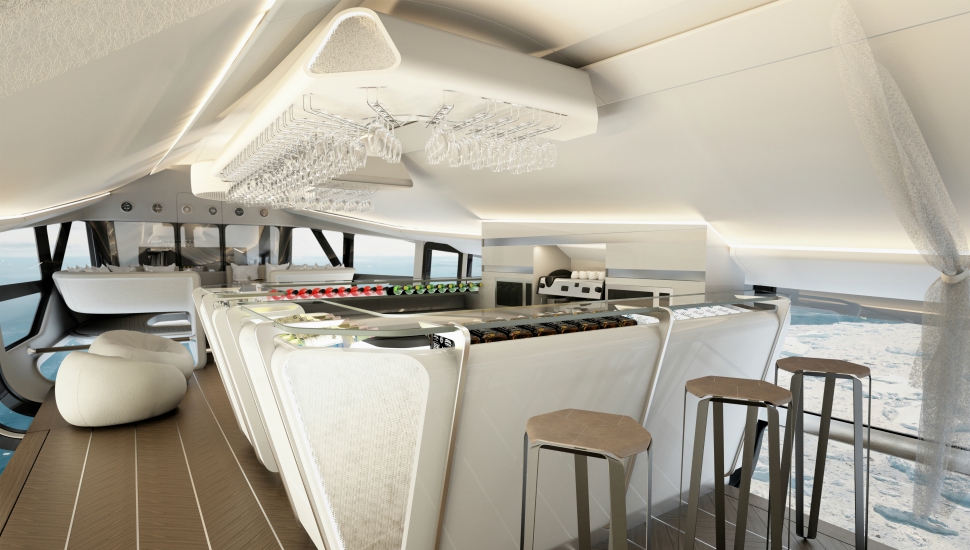 The 15m-long walk-in demonstrator – built by Design Q and shown to FlightGlobal this week – includes a large U-shaped bar, and is intended to illustrate what the full 47m-long interior might look like in VIP configuration. This includes eight double bedrooms, seating areas and features such as panoramic windows and windows in the floor. HAV and Design Q showed a virtual reality version at last year’s Farnborough air show.

In an effort to offer what it describes as the first zero-carbon aircraft, HAV is also working with Collins Aerospace Systems on an electrical-powered system that will eventually replace the current four Thielert diesel engines, says new chief executive Tom Grundy.

The former BAE Systems engineer says HAV is ready to open a production line – he will not reveal where – and build three flight-test aircraft as soon as the company secures its first firm customer or customers. The company plans to begin flight testing “by the early 2020s” with deliveries from 2024. Initial output is likely to be three aircraft a year, but will “ramp-up fairly rapidly” to 12, says Grundy.

He says HAV is “well placed” to secure the institutional funding it needs to build flight test aircraft and a final assembly facility. Until now, small, enthusiast shareholders – including Iron Maiden frontman Bruce Dickinson – have provided most of the start-up’s finances.

Damage sustained in a ground incident in November 2017 – six brief sorties into an earlier test-flight programme, and 15 months after an earlier crash – put paid to the 92m- (300ft)-long Airlander 10 prototype. HAV has spent the 21 months since refining the design of the 10t-payload aircraft, Grundy says.

One of the changes has involved moving some of the equipment from an aft service bay to above the gondola – which hangs underneath the helium-filled hull – creating more space for passengers, freight or surveillance systems.

“We’ve been taking everything we learned from flying the prototype to come up with the most compelling proposition possible,” says Grundy. “We’ve been in a period when we’ve really been able to look at the design, and we’ve optimised it for commonality for the different markets we’ve identified.”

As well as the luxury cruise sector, these markets include organisations carrying cargo to remote mines or conducting aerial surveys, and defence. HAV’s predecessor company designed the original Airlander for a US Army surveillance contract that was scrapped before the aircraft entered service.

Grundy anticipates defence organisations making up about half of HAV’s customers. The company will showcase the Airlander 10 to this market when it exhibits at September’s DSEI defence and security expo in London.

However, Grundy says HAV is now also seeing “real momentum” in the leisure market, with the Airlander 10 pitched as a longer-endurance, luxury competitor to the small number of Zeppelin airships offering sightseeing excursions.

“We are able to offer an aircraft that can go places where the leisure industry cannot operate,” says Grundy. These range from cruises over the Alps to transport between remote luxury resorts. “There is a growing interest in new day and overnight experiences that people are prepared to pay for, as well as in sustainable travel, and we can deliver both,” he says.

Grundy says that for both the commercial and defence markets, HAV will likely team with specialist partners or prime contractors. “The core of our business model is to deliver cost effective capability, which can be tailored to individual customer needs by a third party,” he says.

Although he will not reveal details, Grundy says HAV is aware of what regulators’ requirements are for a flight test and certification programme. “We have had a lot of detailed conversations with EASA [European Union Aviation Safety Agency] and have opened that same conversation with the FAA [US Federal Aviation Administration], and we know what the process will involve,” he says.

Six years after a group of visionaries formed HAV to certificate a new version of the abandoned US Army Airlander design, putting together a team of engineers and test pilots, as well as a supply chain, Grundy says “we are now in a position where we are really happy” with the aircraft.

“We are finally transitioning from a design and flight test organisation to being a production organisation able to make 12 aircraft a year.”