Australian search for MH370 gets underway in Indian Ocean

The Australian Maritime Safety Authority (AMSA) has issued details about the Indian Ocean search area for the Malaysia Airlines 777-200ER that disappeared under mysterious circumstances on Saturday 8 March.

The northern tip of the planned search area lies about 3,200km to the west of Perth in the Indian Ocean. Based on images released by AMSA, the zone is approximately 2,500km north to south and 1,000km across at its widest point.

The proposed search area was given to AMSA by the US National Transportation Safety Board. 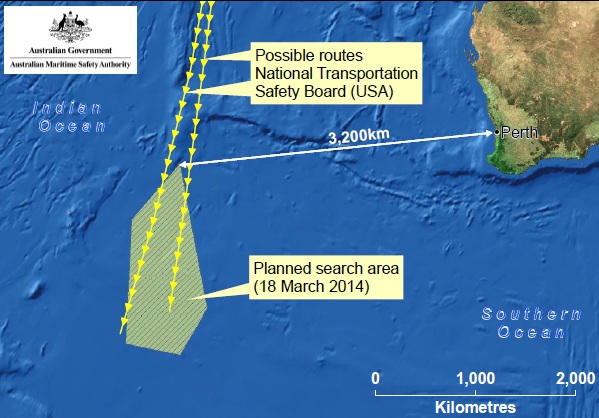 On 17 March, AMSA says a single daylight sortie will be flown with a Lockheed Martin AP-3C aircraft, operating from RAAF Pearce, near Perth.

AMSA lists five aircraft as being available for the search effort: four AP-3Cs, a single P3-K2 from New Zealand, and a single Boeing P-8A Poseidon from the USA. The arrival of these aircraft will allow five search sorties to be operated during daylight on 18 March, says AMSA.

A former officer in the US navy with extensive experience in maritime search and rescue tells Flightglobal that radar is of little use identifying small bits of debris bobbing in the ocean, and that the aircraft involved in sea searches need to rely on the visual acuity of the aircraft crew. Infrared sensors are also of no use because if the aircraft entered the sea on 8 March, then any debris would have cooled to the same temperature as the water.

These challenges are compounded by the immense size of the search area for the missing MH370.

Flight MH370 was operating the Kuala Lumpur-Beijing route when it vanished from air traffic controller’s screens in the early hours of 8 March. This resulted in a massive, albeit fruitless, search effort focusing on the Gulf of Thailand and later the Straits of Malacca.

The search has since moved to focus on two corridors based on satellite data - one northwards between Thailand and Kazakhstan, and the other over the Indian Ocean.