NASA will soon ask companies to bid for a contract to build a supersonic X-plane whose preliminary design review was completed on 23 June by Lockheed Martin.

The Low Boom Flight Demonstrator (LBFD) is scheduled to begin flying in 2021 after NASA selects the manufacturer early next year, the agency says.

The supersonic, single-engined jet is intended to prove that new design tools developed by NASA and industry can muffle the thunderous double-boom produced by a supersonic shockwave to a non-annoying thump. Such data could be used to ask regulators in the USA and Europe to overturn restrictions on flying aircraft at supersonic speeds over populated areas.

It also will serve as a testbed for other technologies. Instead of a forward windscreen, the X-plane pilot will view the aircraft’s forward path from an ultra high-definition video produced by a camera installed in a fuselage-mounted fairing, says David Richwine, who managed the preliminary design project called the Quiet Supersonic Transport (QueSST). 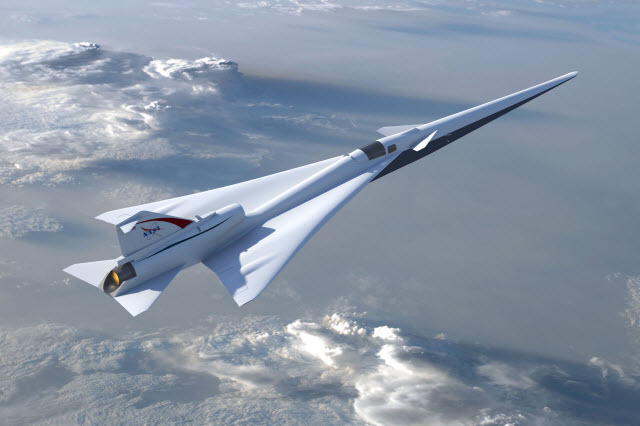 “NASA plans to provide an eXternal Vision System (XVS) and other sensor technologies (with an equivalent level of safety and performance) in place of the forward-facing window,” Richwine tells FlightGlobal.

A newly-released rendering of Lockheed’s preliminary design reveals other features of the highly-swept, delta-wing jet. A row of eight vortex generators are arrayed over the top of the fuselage just aft of the cockpit and a set of moving forward canard surfaces.

The main feature is the extended nose section, which is shaped to attenuate the passing of the supersonic shockwave as the aircraft accelerates through Mach 1.0 speed. NASA’s noise limit for the X-plane’s design is 75PLdb, a measure of perceived loudness equivalent to a conversation in a restaurant. By contrast, the BAC/Aerospatiale Concorde was measured with a perceived loudness of 105PLdb.

The aft-mounted engine is placed atop the area-ruled fuselage, supporting a vertical tail. The preliminary design calls for an engine sized to provide about 20,000lb-thrust, Richwine says. Lockheed used the GE Aviation F414 engine as the baseline for design studies, but several candidates for the propulsion system are available for the X-plane, Richwine says.