Textron Aviation has submitted a new request for exemption from US Federal Aviation Administration (FAA) flammability requirements covering the Cessna Citation Longitude's fuel tank. It says the aircraft already "maintains an acceptable level of safety", and that a refusal to approve its petition will "disrupt" deliveries of the super-midsize business jet, as well as potentially leading to cancelled orders.

The company's latest request was issued four months after the FAA issued a temporary waiver from the flammability requirements until January 2020, allowing the US airframer to certificate the Longitude before the end of 2018 and begin delivering the aircraft soon after.

The initial appeal for exemption concerned a difference in interpretations between Textron and the regulator over what constitutes a centre fuel tank. The Longitude – also referred to by its official Model 700 programme designation – is designed with the fuel tank in a conventional, unheated aluminium wing, but features a centre portion covered by aerodynamic fairings.

Textron considers the entire fuel tank to be in a conventional unheated aluminium wing, and therefore meets "associated flammability requirements"; the FAA, on the other hand, believes the centre portion of the tank falls outside that regulation and therefore does not comply with the requirements.

The airframer's latest appeal is more narrowly focused on the more extensive requirements that apply to the use of the flammability reduction means (FRM) in fuel tanks.

The FAA determines that the Longitude's dedicated electric recirculation pump – incorporated into each main fuel tank to help cool the fuel – is an FRM, so the system must meet higher and more onerous standards of FAA Part 25 appendix M. However, Textron says these requirements "go above and beyond what a conventional unheated aluminium wing tank can meet". 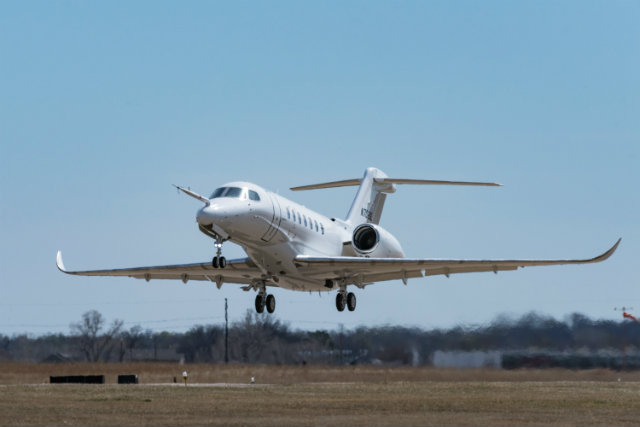 The airframer argues that the Longitude already "provides an acceptable level of safety" without meeting these requirements.

"Review of flight-test data demonstrates that the Longitude fuel tank, with the recirculation system installed, provides performance equivalent to a dual-electric-pump engine-feed system (without FRM) – which would not be required to meet these FAA regulations," says Textron.

A temporary waiver granted in August 2018 calls for the manufacturer to secure FAA approval for a "compliant" design configuration for the fuel tank system by 31 July 2019. This must be incorporated into all in-service Longitudes by the end of January 2020.

Not only does this requirement entail "significant modifications" to the current fuel tank design, Textron cautions, it could also result in major structural changes to the aircraft and other systems.

"Given the extensive nature of these changes and the required ground and flight certification testing related to them, FAA approval could not be completed by 31 July 2019," it notes. This will result in a "disruption of production deliveries and potentially a disruption to the operators", if design changes cannot be incorporated by 31 January 2020, it adds.

Textron says that denying its petition for exemption could lead to numerous Longitude order cancellations and could "significantly" increase its financial losses, while providing "no increase in safety".

The $26 million Longitude was launched in 2012 and made its maiden sortie in October 2016. To date, a five-strong Honeywell HTF7700L-powered flight-test fleet has logged 4,000h.